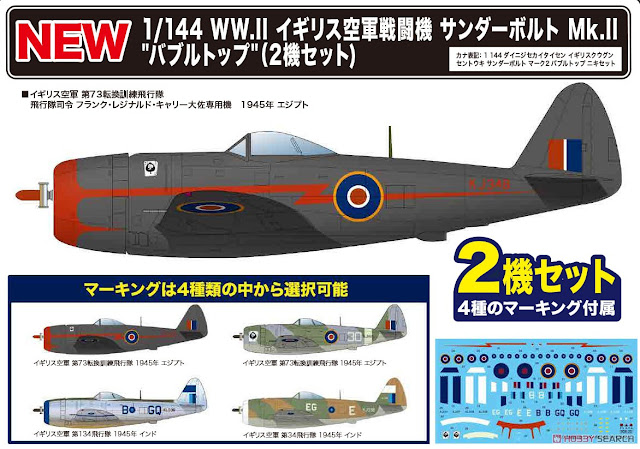 ( This is a machine translation. Please allow for possible misinterpretations in the text. )
Introducing the Royal Air Force Thunderbolt with attractive paint variations !!
The P-47D Thunderbolt, which appeared in the latter half of World War II and became the main fighter of the US Army along with the P-51 Mustang.
The P-47D, which has the image of a powerful and luxurious fighter-bomber in the United States, equipped with a 2,000 horsepower class high-power engine on a large and sturdy aircraft, is highly evaluated by the Royal Air Force.
The Royal Air Force also adopted the original production type `leather bag` as Thunderbolt Mk.I and the late production type` bubble top` as Thunderbolt Mk.II.
Thunderbolt, which was selected by the Royal Air Force with an eye on its high-performance and tough airframe characteristics, was active on the Indian-Burma front at the end of World War II.
-Modeled with a 1/144 scale kit that allows you to check the appearance of Thunderbolt, which was heavily used as a valuable force in the Royal Air Force, in the size of a palm.
The kit is a set of two `bubble top` type Thunderbolt Mk.II equipped with a water drop type (bubble) windshield.
Marking selects two types of aircraft that fought on the Burma front and two types of aircraft that trained in North Africa in anticipation of battle in the tropics.
It is also attractive that these four types of markings are all painted in different styles.
The standard gray camouflage of the British Air Force fighter, the brown camouflage that conveys the harshness of the Burma campaign, the unpainted silver of the US military aircraft, and the amazing special painting and selection of the training unit commander aircraft are fun markings.

The Royal Air Force Thunderbolt, which is said to have fully demonstrated its performance even in the harsh climate and operating environment that cannot be compared with the European front, is a set of two aircraft that also shows its rugged charm. 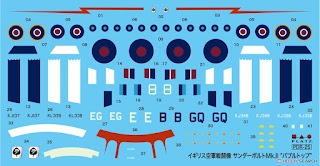