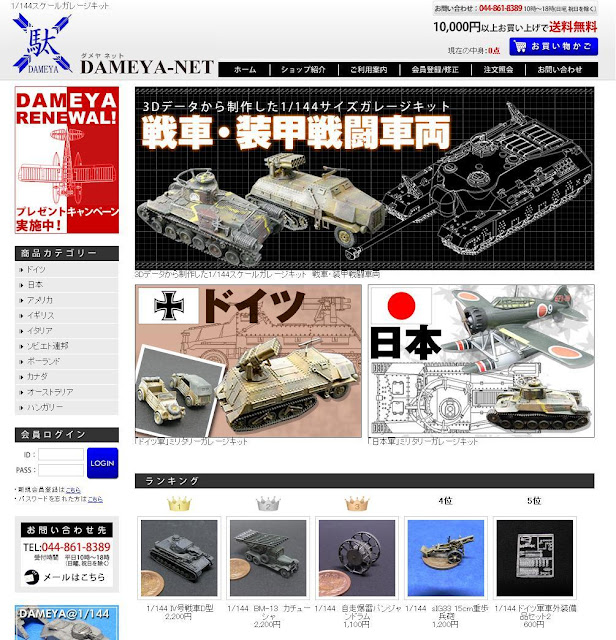 Dameya.net and New Releases!
Dameya has relaunched his website http://www.dameya.net/  for Domestic Japanese customers, with a more modern layout and sophisticated features.

However, fear not, outside of Japan you can still order via Dameya's Shapeways Store!  His latests models are both old favourites and new items to 1/144 (and possibly wider scales?)

1/144 PzKpfw IV ausf.D (Kit)
This workhorse of the Wehrmacht is provided here in exceptional detail for a 1/144 kit, I think this release may have something to do with the sucess of "Girls und Panzer" Anime? (see below!)
http://en.wikipedia.org/wiki/Panzer_IV
http://www.shapeways.com/model/844345/1-144-pzkpfw-iv-ausf-d.html

1/144 Panjandrum (Kit)
A quick google search doesn't reveal an other models of the item, along with Hobart's Funnies, it was conceived to counter act German defences on the beaches of Normandy by smashing a path through obstacles in its path. Although spectacular it was not a very effective device and it never reached full production. (see also CGDs Hobarts funnies)
http://en.wikipedia.org/wiki/Panjandrum
http://www.shapeways.com/model/844351/1-144-panjandrum.html

1/144 sIG33 15cm Heavy infantry cannon (Kit)
Another finely produced kit of the largest designated infantry weapon, designed not as an antitank weapon but rather for demolishing obstacles and strong points/bunkers. It was also mounted on or integrated into other self-propelled platforms
http://en.wikipedia.org/wiki/15_cm_sIG_33
http://www.shapeways.com/model/836454/1-144-sig33-15cm-heavy-infantry-cannon.html 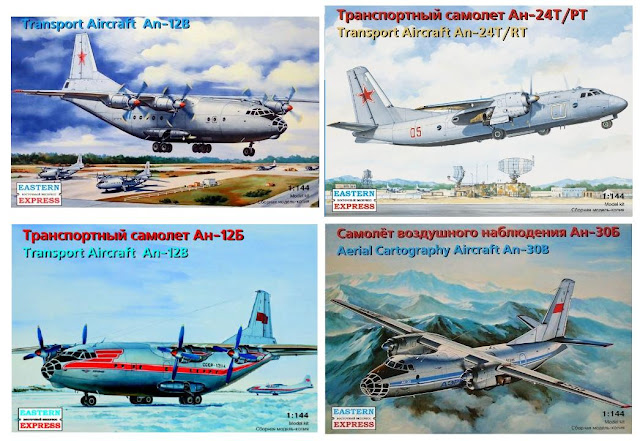 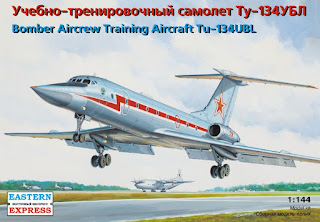 1-144 Eastern Express (selected) 2012 Releases
Eastern  has been busy over 2012 issuing a number of kits featuring aircraft produced by Russian manufacturers!

I seem to have over looked the Tu-134 UBL (Trainer for the Tu-160 Bomber for which there are a number of  kits and upgrades). Any one interested in the Tu-134 should also look at the "small stuff conversions" for the Zvezda Tu134 (review)

More info on A-Model kits can be found here:
http://www.findmodelkit.com/category/producer/amodel

Email ThisBlogThis!Share to TwitterShare to FacebookShare to Pinterest
Labels: AN-12, AN-30, Antonov, Eastern Express, Tu-124, Tu-144 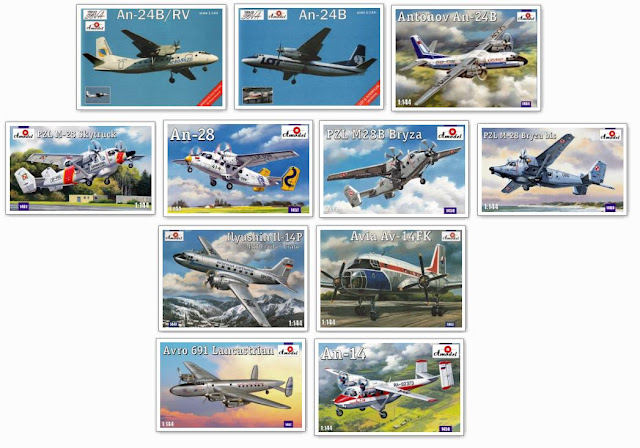 A-Model has been busy over 2012 issuing a number of kits featuring aircraft produced by Russian, Polish, Czech and even a British manufacturers!

More info on A-Model kits can be found here:
http://www.findmodelkit.com/category/producer/amodel

Available from Hannants and other suppliers

Email ThisBlogThis!Share to TwitterShare to FacebookShare to Pinterest
Labels: AN-14, An-24, An28, Antonov, Avia, Avro, Ilyushin, Lancaster, Lancastiran, M-28, PZL 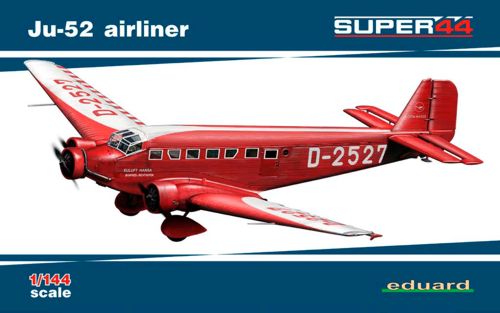 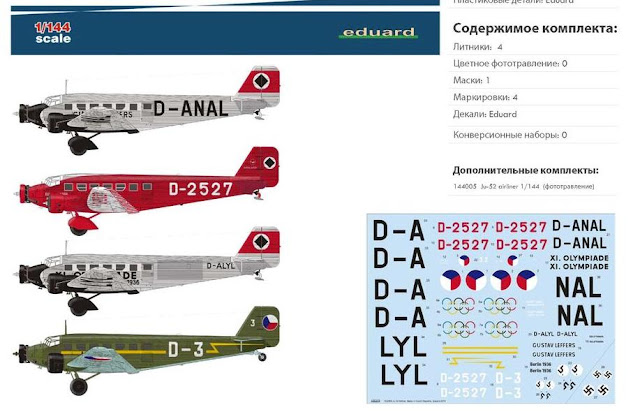 1/144 Junkers Ju-52 'Airliner'  & Photoetch Set - Eduard
When announced a month or so back, it did seem a little curious, however here we have the first in a possible range of issues for 'Airliner' Variants of the venerable Ju-52.


I think you all know about the Ju-52 so I won't dwell on that. However,  D-2527 was registered to Lufthansa and was a tribute to WWI Manfred Von Richtofen and was used as a one of the personal transports of another WWI Ace although known more notoriously with his role as head of the Luftwaffe - Hermann Goring.

Painting this properly could be a task and a half ( link )

To coincide with the release of this kit Eduard are also to release an eye watering and finger boggling inter photo etched set (to be available at additional cost) to fit out the interior of the kit.

I do hope that this does not mean that the 'military mould' has been converted to the 'Airliner mould'?

More shots of the final production issue this item previously discussed at KG144 BBS ( link ), it would appear that the colour scheme has been rectified to some degree... 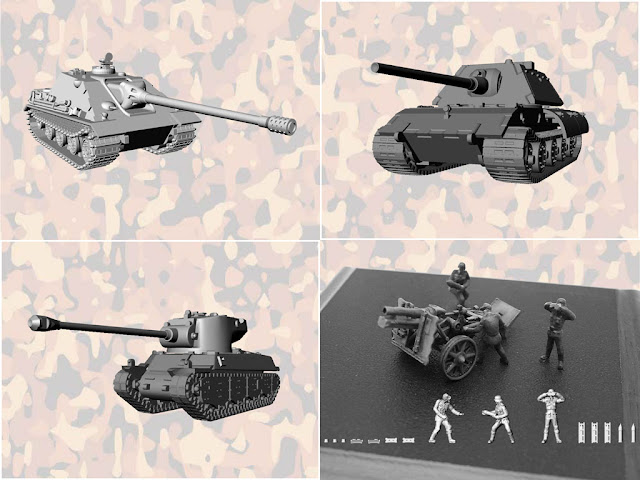 form the web eShop ONLY!

or straight into the eShop:
http://www.combatgroupdynamix.com/eShop/eShopNew.html

And check out at the same time our eShop only preorder secret items with discount prices!
Posted by bluedonkey99 at 15:07 No comments:

Email ThisBlogThis!Share to TwitterShare to FacebookShare to Pinterest
Labels: CGD

We have not featured anything from Matuo Kasten for a while, but he has been busy creating some impressive items. One of the most recent of which is a comprehensive kit of the M1A2 TUSK2 (Tank Urban Survival Kit 2) a masterpiece in resin!

The M1000 Tractor and M1070 Semi Trailer are available as seperate kits, and are not included with the M1A2 TUSK2 kit.

Please also be reminded that Matuo Kasten does a range of other kits for modern US Armoured Fighting Vehicles as well as a range of modern and historical aviation and combat vehicles and is happy to ship worldwide, in addition they can also be found on Radjapan and HLJ websites. It must be notes that the Matuo Kasten kits are not for the Novice some experience is required to maximise the result. 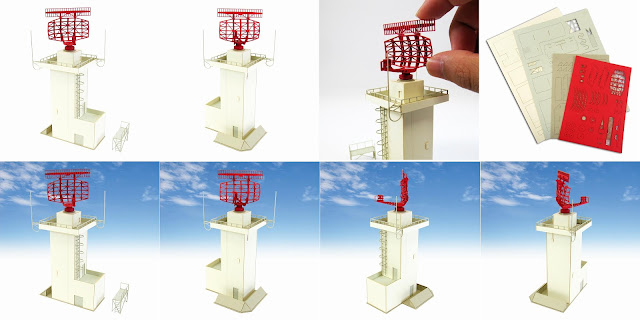 1/144 Radar Tower - Sankei
Another item in the great range of architectural dioama pieces from Sankei of Japan
High quality pre-coloured  laser cut card making for easy assemble and no crooked scissor lines!
Again, at 34USD its not cheap, but it will be well engineered and if it what your looking for!? 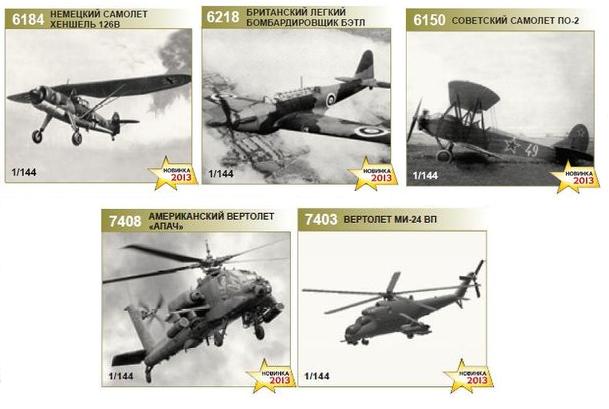 It looks like 2013 will see Zvezda expand its "Art of Tactics" gaming range in two ways: a) expanding the "Great Patriotic War" series, b) adding  "Modern Era" Series. The benefit of this is we get some more 'cheap and cheerful' 1/144 aviation kits! 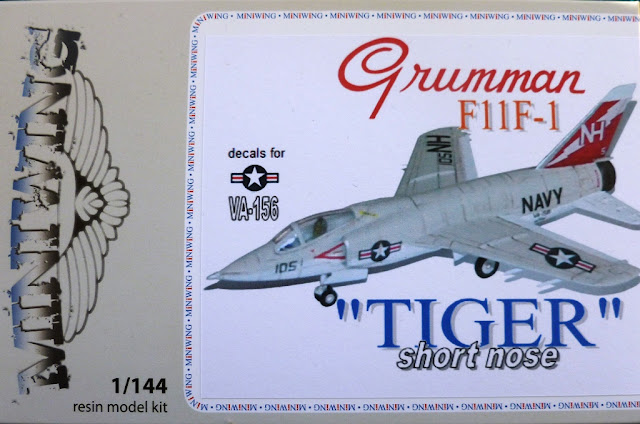 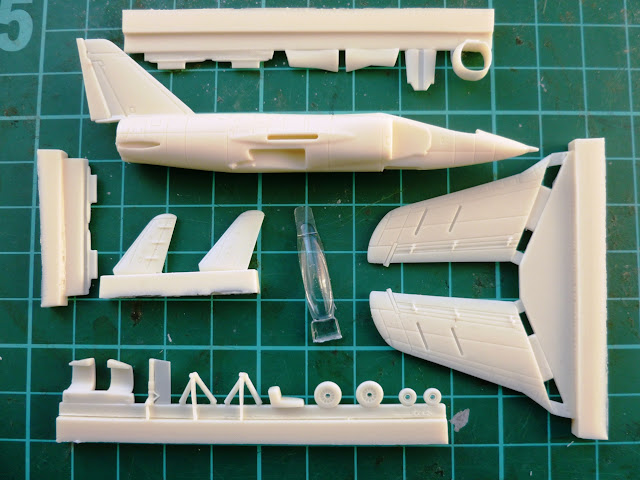 1/144 Grumman F11F-1 Tiger - Minwing
The Grumman F11F/F-11 Tiger was the first supersonic, single-seat carrier-based United States Navy fighter aircraft in operation during the 1950s and 1960s. Originally designated the F11F Tiger in April 1955 under the pre-1962 Navy designation system, it was redesignated as F-11 Tiger under the 1962 United States Tri-Service aircraft designation system.

The F11F (F-11) Tiger origins can be traced back to a privately funded 1952 Grumman concept to modernize the F9F-6/7 Cougar by implementing the area rule and other advances. This Grumman company project was known as the G-98, and by the end had departed totally from the Cougar

On Sep 21, 1956 Grumman test pilot Tom Attridge shot himself down in a graphic demonstration of two objects occupying the wrong place at the same time—one being a Grumman F11F-1 Tiger [138260], the other a gaggle of its own bullets..

The kit conforms to the Miniwing signature format and feel being cleanly cast and no obvious air bubbles. The panel lines on fuselage  are very finely cast and provide a good balance between finesse and detailing, the undewing lines are a little more defined but do convey a lot of detail. A single set of decals is provided for  VA156, based on the USS Shangri-La, 1958 and a clear resin canopy.

Under wing pylons are provided, but no weapons or stores so these will have to come from your stash or Oz-Mods?

The Me-163s is a training version of the regular Me-163B with the rocket motor and fuel tanks removed enabling the installation of a second seat and revised canopy in order that pilots could learn critical landing skills. Interestingly the Russians captured and test flew a number of these 163S variants after the war.
http://en.wikipedia.org/wiki/Messerschmitt_Me_163

The kit here is presented simply the take off dolley wheels, main fuselage and a canopy, as all three are in the FUD (Fine Ultra Detail) material from Shapeways it means the canopy is opaque  However, I feel the reason why this piece is separate is that it may provide the option for a 'heat bashed' canopy to be made (this would require a little work then to add some interior detailing.

The Scheuch Slepper is a more unusual device, design to assist in the handling of the Me-163 on airfields  derived from a pre-war agricultural 'tractor' it was adapted and with with a trailing wheel are tow rope or bar, or the one of two versions of a hydraulic trailer with either lifting arms or inflatable bladders, the former and one most commonly associated with this aircraft.
http://www.flickriver.com/photos/deckarudo/sets/72157629402189596/

The Schllepper should also work well with your Project Flieger Me-163B bonus kit, and may even be able to handle the Project Flieger Me-163C variant (although this is not confirmed to-date). It is presented here in three parts giving your the ability to configure the kit in one of two ways.

Both items are available separately to purchase.


It would also be happy pulling a V-1 on its wheeled dolley/trailer (see V-1 option on KG-144) as shown on the link below:
http://robdebie.home.xs4all.nl/me163/equipment37.htm 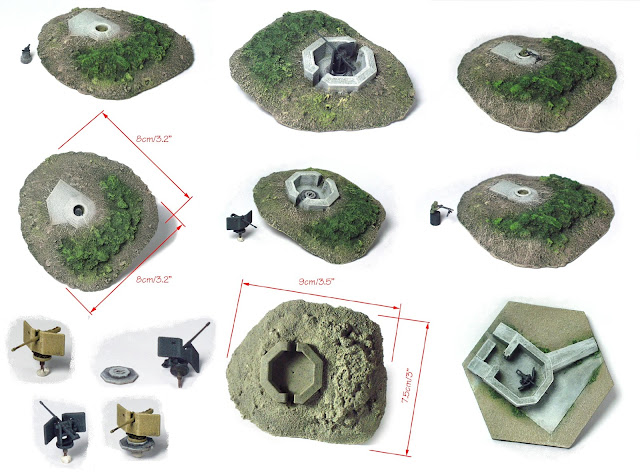 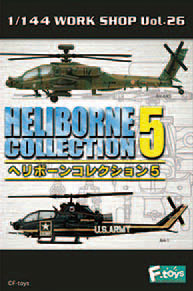 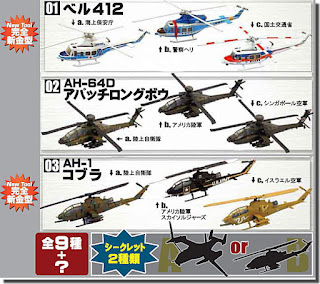 Do we have a new Heliborne Series coming soon,  as spotted on the F-Toys photo gallery,?
A new mould AH-64D Longbow as shown would surpass the previous F-Toys AH-64 and The Doyusha releases. I would imagine we should see a  US scheme or two and maybe some of nationalities, as for another helicopters in the series then more info is expected next week..... 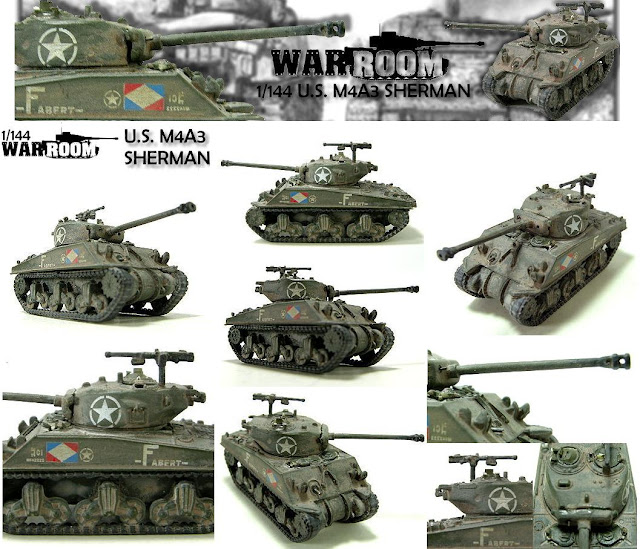 ACI's War Room range is to be further expanded with a new Sherman Varient, the M4A3.
To launch this expansion there will be a limited edition item of 200 pieces of the  Free French Forces "Fabert" Sherman.

We have waited a long time for a DeHavilland Vampire in 1/144 and now we have a nice FB.6 as provided here by Small Scale Shop. This version is optimised for Shapeways 'Fine Ultra Detail' material' (FUD) with a "White Strong Flexible" (WSF) version to follow shortly.

The FB.6 is an evolution of the F.1 that also flew in 1945 didn't enter service until 1946, thus becoming the second jet fighter to enter service with the RAF.The FB.6 was very successful and led to a "Sea Vampire" for Royal Navy use and was widely exported to over 30 countries. This aircraft would obviously look great along site your F-Toys Meteor, or hunting down those Me.262s!?

1/144 Gotha P.60a - Kampfflieger
Kampflieger is adding to his stable of Luft'46 Designs, with this Gotha P.60a with its under and over twin engined configuration and tricycle undercarriage (on a mini sprue for placement if your wondering why it looks a little odd above). Its low profile is due to its "prone" pilot position employed in some of the earlier Horton Trials and even the later Meteor F8 Prone Flight Tests. 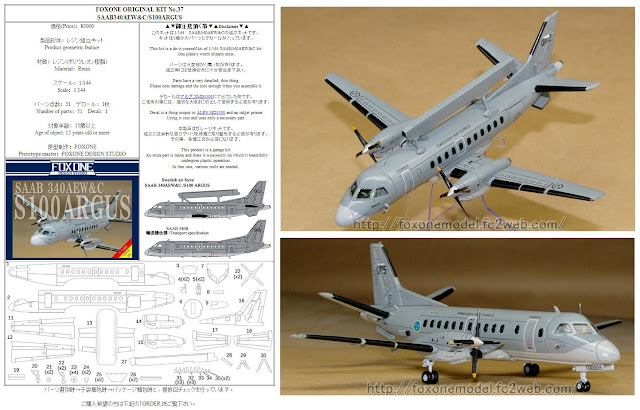 Available: From November/December 2012
Outside Japan from  RadJapan  or HLJ

If you like this, you may be heartened to know that there is a Beechcraft350/LR-2 coming soon from Foxone.! http://foxone2.blog53.fc2.com/blog-category-93.html
Posted by bluedonkey99 at 19:25 No comments: 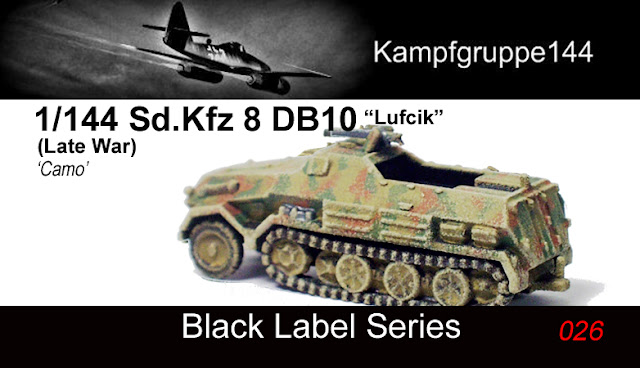