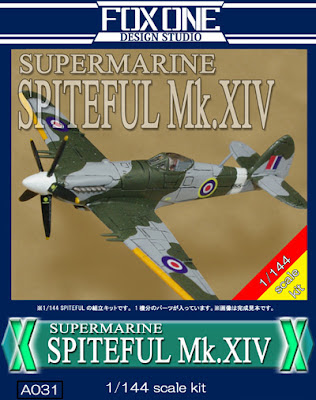 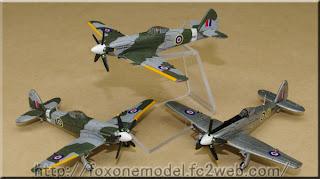 1/144 Supermarine Spiteful - FOXONE
Foxone has completed the work on the Supermarine Spiteful. The Spiteful although based upon the Griffon powered Spitfire and incorporated a new wing designed to cope with higher Mach speeds, and a range of other design features to improve visibility and handling. ultimately not adoptied in large numbers by the RAF, it did feed into the Naval Supermarine Seafang and ultimately even the jet powered Supermarine Attacker!

1/144 Soviet T-100 by Panzer Depot
Panzer Depot is not content with bringing us a range of unpainted resin kits, now returns to their mainsay of prepainted items of unusual subject. I love these multi-turreted item, I know they are not technically competent on the battlefield but it is the kind of crazy tank you might have also drawn as a child!


The T-100 was a twin-turreted Soviet heavy tank prototype, designed in 1938–39 as a possible replacement for the T-35. The T-100 was designed to by N. Barykov's OKMO design team at S.M. Kirov Factory No. 185 in Leningrad. It was in competition with a similar design - the SMK - but neither were adopted and instead a single turret version on the SMK was ordered as the KV-1.

The T-100 tank sported two turrets placed on a long chassis. The front turret, mounting a 45mm antitank gun, was placed at a lower elevation than the other, and as such had a limited area of fire. The top turret, mounting a 76.2mm gun, was able to turn a full 360 degrees. The multi-turret design concept had been common in the 1920s, with the British one-off Vickers A1E1 Independent influencing the Soviet T-35. The prototype T-100 tank was briefly tested alongside the other designs in the Soviet invasion of Finland in 1939 without success. It was never put into production, due to the archaic design concept, poor mobility and the availability of a far superior alternative, the KV series. In an attempt to rush a tank armed with a large howitzer capable of dealing with Finnish bunkers into use, one of the T-100s was converted into the SU-100Y self-propelled gun. It did not go into production, although the prototype was used in the defence of Moscow in 1941. 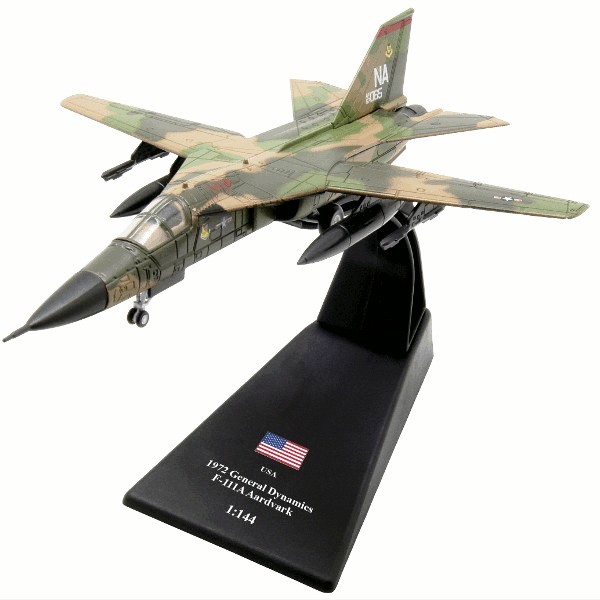 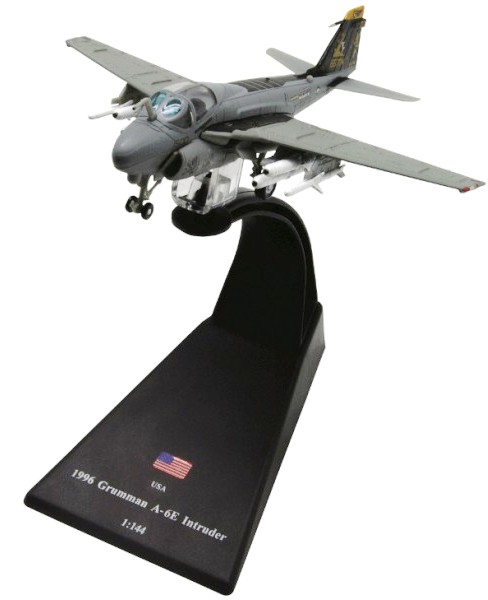 As usual with these Amercom releases, outside of Poland and the Czech Republic the best approach to look on ebay.
Posted by bluedonkey99 at 14:31 No comments: 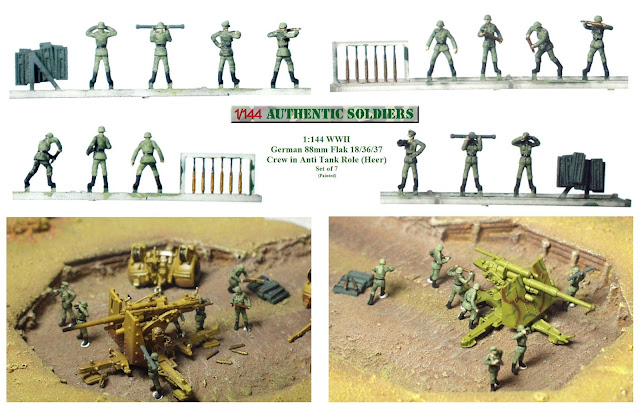 FINALLY, a decent crew to man your collections of "Acht-acht"!!

The soldiers can be assembled for use on wargame table by attaching to foot plates (Foot plates NOT provided, any plastic sheets will do), or can be used as is for dioramas.


Supplied painted as seen (some colour variation may occur)

1/144 WWII Resin Kits - Panzer Depot
PanzerDepot has pulled a surprise out the hat for us all and has released as set of their range in unpainted resin kit form! The kits look good on the pictures and the pricing in competitive for resin based kits! If this approach is successful and more items are released I think many people are going to be quite happy!

See for yourself at the PanzerDepot Store ( here )
Posted by bluedonkey99 at 07:00 No comments: 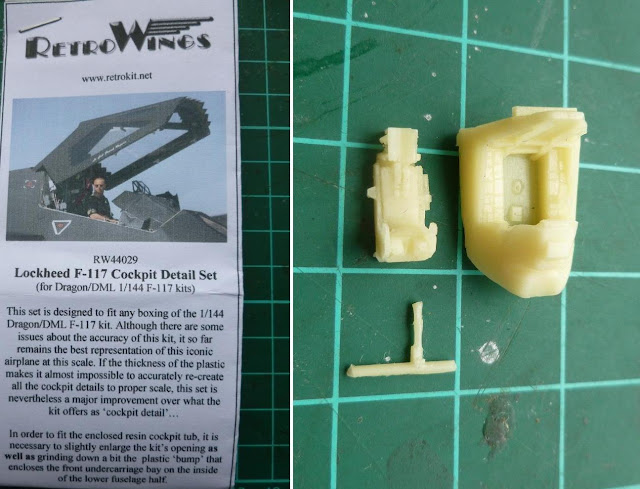 1/144 F-117 Cockpit Upgrade Set - Retrowings
We're spoiling you today with another upgrade set, this time something a little more modern. A nice 3 part set to provide your Dragon/DML 1/144 F-117 with a new detailed interior cockput tub. This is going to look great in a kit with the 'office' on show as once primed and painted the detailing on the control panel and seats is going to jump out at you.

An instruction sheet is provided with full colour photos to assist you in accurately painting the interior, and also provides guidance on some modifications that shoudl be made to make the plastic kit more accurate! 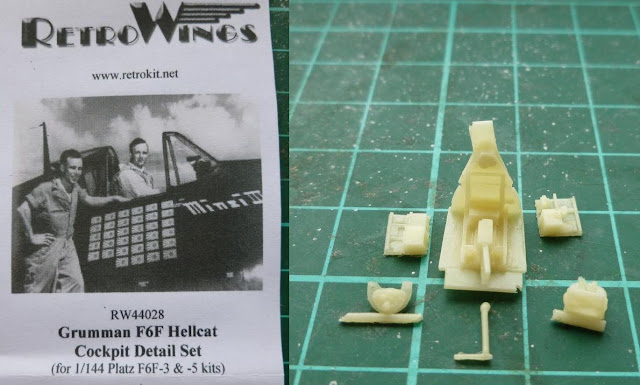 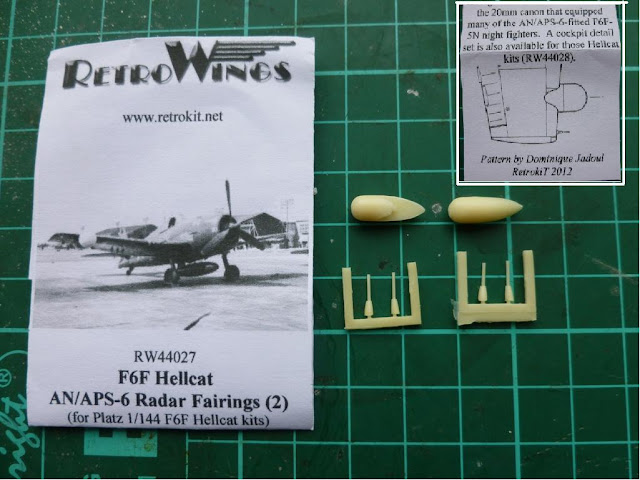 1/144 F6F Hellcat Upgrades - Retrowings
Retrowings series of upgrades continues its pace with a set of new releases for the Grumman F6F Hellcat, so if you want to add some detailing to this iconic aircraft you now have a number of finely cast items (sorry, my photos don't show these upgrades to their full glory.

Both sets are designed to upgrade the 1/144 Platz kit.

RW44027 Grumman F6F Hellcat - (2x) AN/APS Radar Fairings and 20mm Canon, this set allows for the conversion to a F6F-3N or F6F-5N.
http://www.retrokitonline.com/index.php?main_page=product_info&cPath=1_2&products_id=27

RW44028 Grumman F6F Hellcat - Cockpit Detail Set, a fine 6 part set with detailed side paned, cockpit sub with seat, instrument panels and stick. It comes with an informative leaflet to help with fitting, to guide the replacement of the Platz parts.
http://www.retrokitonline.com/index.php?main_page=product_info&cPath=1_2&products_id=28

See the Retrowings Site for more interesting upgrades and accessories in 1/144
Posted by bluedonkey99 at 19:36 No comments: 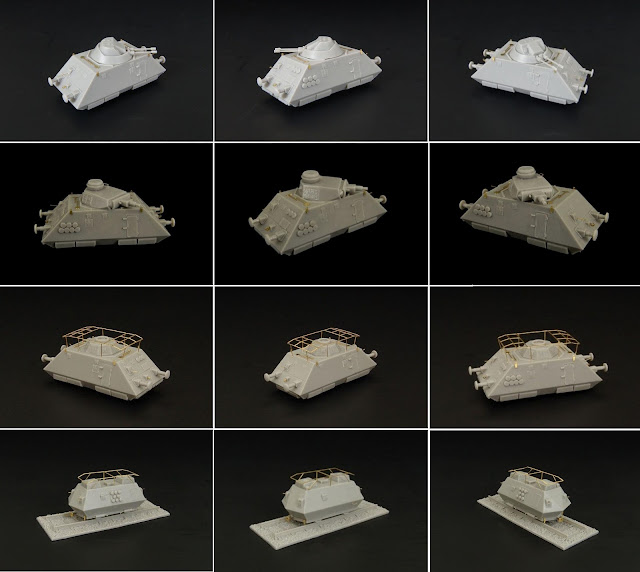 1/144 German Armoured Draisine Kits - Brengun.cz
Although I have focused on on or two of these Draisines from Brengun in the past, I thought it opportune to review the series to-date. Curiously the series has been joined by a 'Kugelblitz' varient Draisine of the "What If" variery, the other t3x items represent historical vehicles. 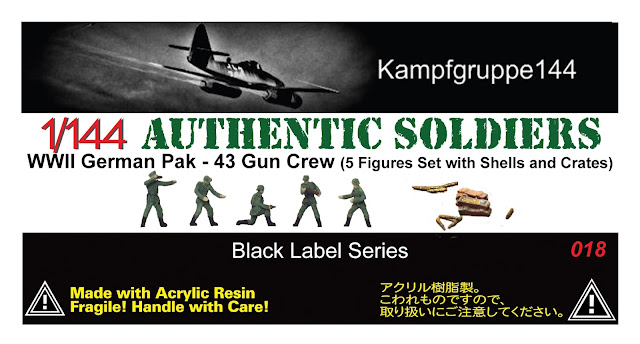 Shown in diorama (PAK 43 Not supplied)

Digitally mastered, the soldiers are fabricated with state of the art "3D Printing" technology in ACRYLIC RESIN. The resin material is like regular resin and should be handled as such. Figures are designed for operating Kampfgruppe144 & CGD 88mm Pak 43 anti tank guns in all its versions, such as:

The should also work along side PAK 43s from other manufacturers, if  scaled to true 1/144.

These soldiers can be assembled for use on wargame table by attaching to foot plates (Note: Foot plates NOT provided, although any plastic sheets will do), or can be used 'as is' for dioramas.

Supplied painted as seen (some colour variation may occur) 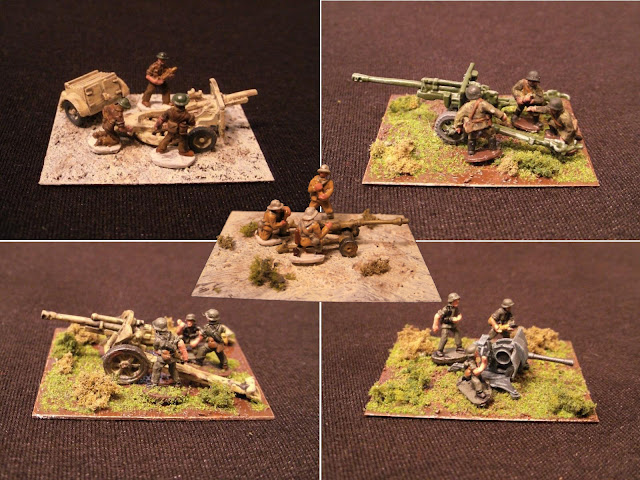 1/144 Figures by TACPainting
The new start-up TACPainting have upped their range of 1/144 items and have released a series of figures based around gun crews representative of the key artillery pieces from the major powers. These currently, figures cover British, American, Russian, German, Italian and Japanese forces, more to follow!

1/144 artillery and flak guns with crews are detail painted and then mounted on thin metal 30mm x 40mm bases.  (to reduce the height next to the vehicles)

AS an introductory offer they are available as painted set for $10.00 each with free shipping in the United States and only $10.00 shipping anywhere else in the world for any amount you buy! 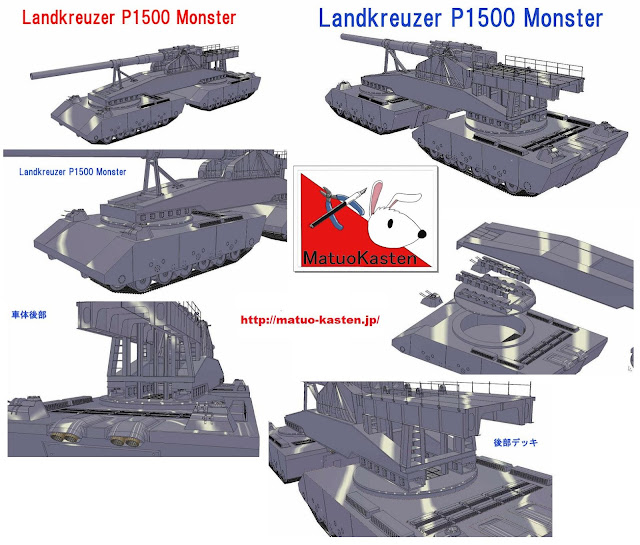 1/144 Landkreuzer P1500 'Monster' - Matuo Kasten
There are a number of variants of the hypothetical designs for a P1500 weapon, Matuo Kasten has gone for a slightly different approach of having what appears to be a "Dora" transported on a pair of "Ratte's". This is not so far off the mark (if such a comment can be sensible placed whilst discussing such a crazy idea), as there was similar talk of mounting a "K5" Leopold between to (King) Tigers? Therefore scaling this up in a logical fashion gets you to the proposal shown above.

As Matuo Kasten has previously produced two versions of the RATTE, I think we can safely assume that this will get produced. The questions is do you have a budget and a shelf big enough to hold it! 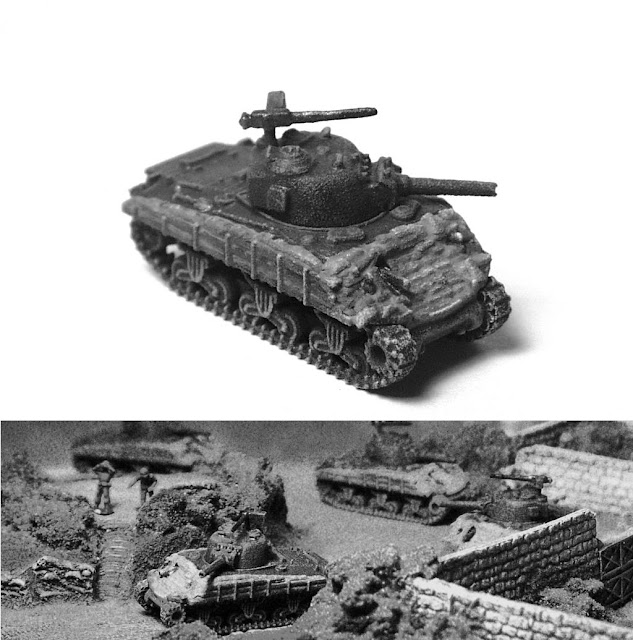 1/144 WWII US M4 Sherman with 105mm Howitzer  - CGD
This new release in the CGD range of Sherman tanks varient has been inspired by the discussion on KG144BBS, and therefore should get a warm welcome.

Both the M4 and M4A3 Sherman were upgraded/factory equipped with a 105mm M4 howitzer. They fired a powerful high explosive charge and were used as assault guns platoons. However the gun performed poorly as anti tank weapon and was rarely deployed against enemy tanks. But a HEAT (High Explosive Anti-tank) ammunition was available for self defence. The 105mm Sherman was also the first to be equipped with a all vision commander copula.

Sherman tankers often improvised to "upgrade" their armour protection in the field and one way was stacking sandbags around the hull armour. They were useless against kinetic rounds but was thought to provide protection against German HEAT weapons such as Panzerfaust. This proofed to be more psychological than practical. Tests showed that such protection although can protect the Sherman from a frontal impact of Panzerfaust 60, a side attack of the weapon blew away the sandbags and still penetrated the armour.