There are two kits with decals in each box so two complete models can be made.
These were originally Eduard kits that have now been improved with resin cockpits and Mark I decals.

The decals are nice, though the kits are quite basic by modern standards. I am not sure when they were released but there are reviews from 2000, they actually seem to have a passing resemblance to the standard of the  recent Zvesda war gaming kits as they do not have cockpit cavities... 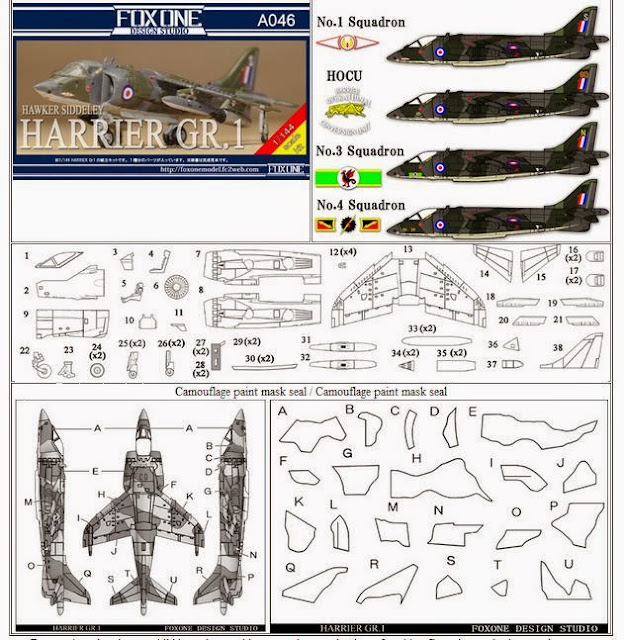 Foxone has released the first in the series of kits covering the evolution of the HS Harrier and AV8-A
http://en.wikipedia.org/wiki/Hawker_Siddeley_Harrier

Includes 4 Decal Options for:
No.1, No.3 and No.3 Squadrons RAF, and the joint service HOCU(Harrier Operational Conversion Unit)

Interestingly FoxOne is also including a paint masking set with his kit to see how it is received by purchasers. 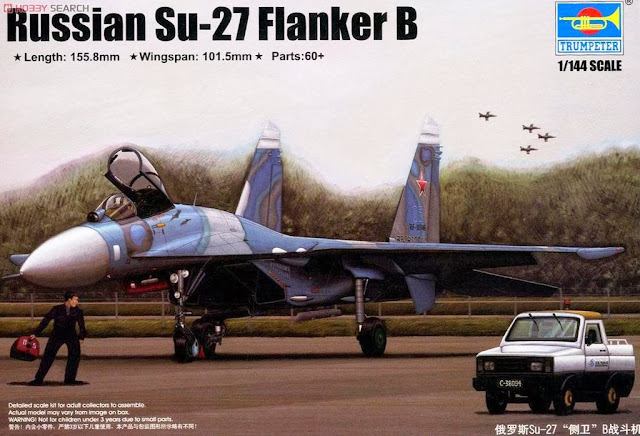 Looks like there will be a 2 Seater as well!
http://ipmsphilippines.com/articles/trumpeter-1144th-sukhoi-su-27/ 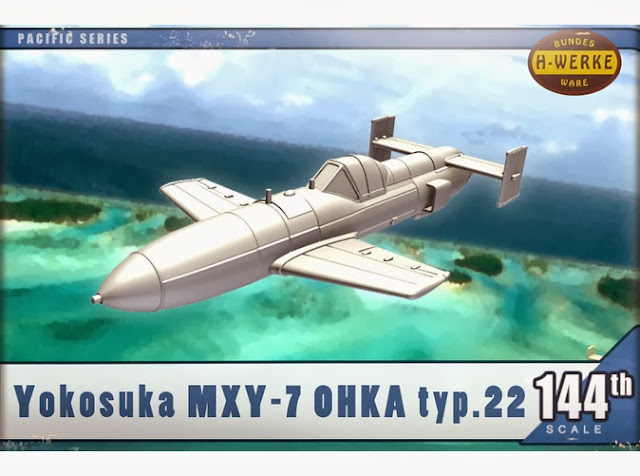 Experimental version of the MXY7 the Type 22 was designed to overcome the short stand-off distance of the Type 11, although not thought to have seen operational service.

Although not currently available, it is expected soon from H-Werkes Shapeways store:
http://www.shapeways.com/shops/hohenweg

Although the Type 11 has made appearances in the form of a on some special edition  Mitsubishi G4M "Betty" by Cafe Reo, a limited edition resin kit by Artillery and as a metal kit by  Riveresco/Tin-soldier I don't recall a Type 22 previously?
Posted by bluedonkey99 at 19:42 No comments: 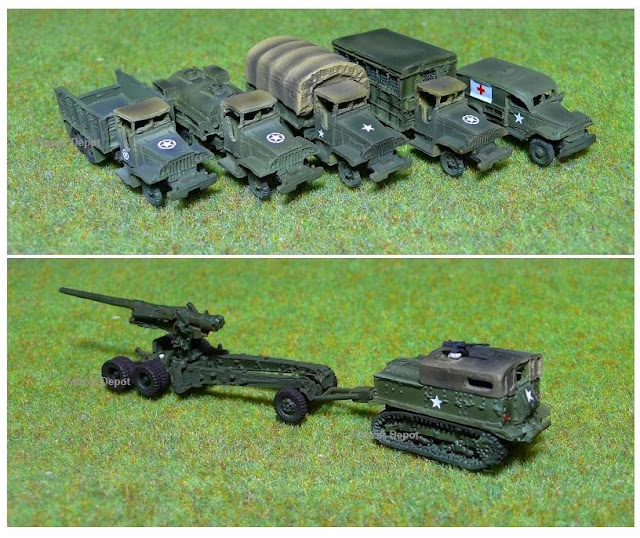 Note: the Long Tom was originally issued as a special issue to existing customers....
http://kampfgruppe144.blogspot.co.uk/2009/06/1144-155mm-long-tom-by-panzer-depot.html 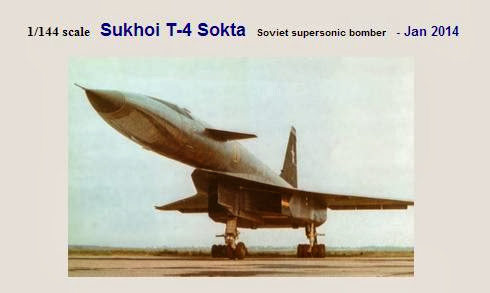 Not much to go on a the moment, other than this is likely to be the "real T-4" opposed to the conjectural T-4MS previously released by Anigrand?

Hopefully it will have some cool 60/70s era experimental bonus items...

http://en.wikipedia.org/wiki/Sukhoi_T-4
You know that after this your going to feel the urge to build a Tu-144 as well!??

Avro's mighty Vulcan was the mainstay of the RAF's V-Bomber force through out the 1960s and '70s. With the retirement of the Valiant and the conversion of most Victors to the tanker role, the Vulcan soldiered on, both as a freefall bomber and with the Blue Steel standoff missile. At the very end of her career, the Vulcan was called on to drop bombs in anger for the first and only time during the Falklands War in 1982, albeit not the nuclear weapons envisioned when she was designed. The Vulcan will forever be the symbol of the RAF's deterrent force in those crucial two decades of the Cold War.

Our decal sheet will allow you to build virtually any Vulcan B.Mk.2 that ever flew. We have provided full stencil data and national insignias for both the anti-flash white scheme and the later camouflage schemes. Multiple variations on several squadron badges are provided, as are several non-standard 'zaps'.

Designed for use with Pit-Road/GWH kits, though should be compatible with Wolfpack, Welsh Models and Anigrand Vulcans.

There is a review at Hyperscale: http://www.hyperscale.com./2013/reviews/decals/fundekalspreview_4.htm 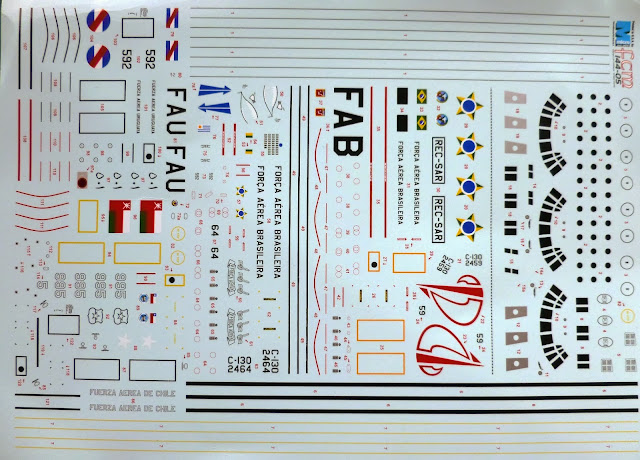 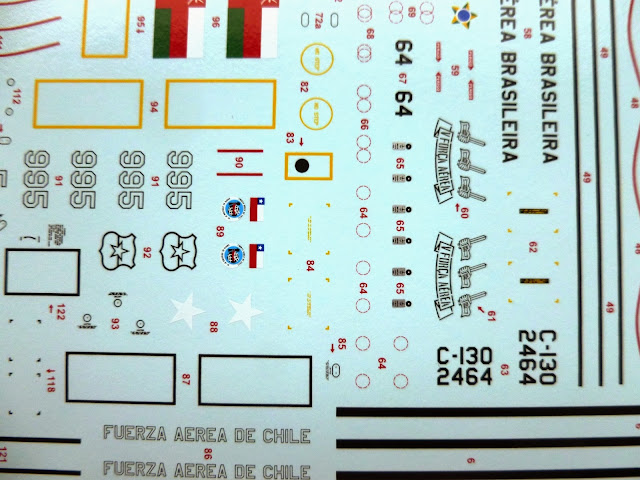 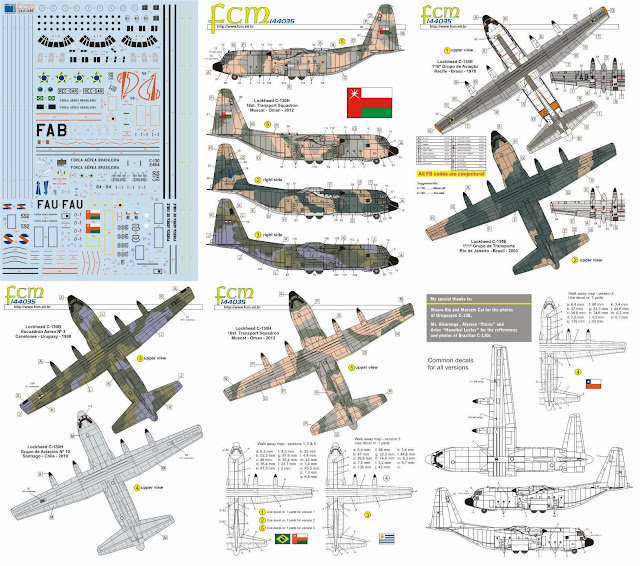 1/144 C-130 Decals (Part 01) by FCM
We have featured 1/144 releases from FCM before, and here again we have the first in series of decal sets for the venerable Lockheed C-130 "Hercules". This first series provides stencils and marking for 4x different nationalities Brazil, Chile, Uruguay and Oman, thereby providing alternative to US oriented decals that come with most C-130 kits from Minicraft and A-Model.  The quality of these screen printed decals is excellent (please don't let my photography fool you otherwise) and the placement sheets excellent, if your looking for a Latin American scheme then these are your babies! 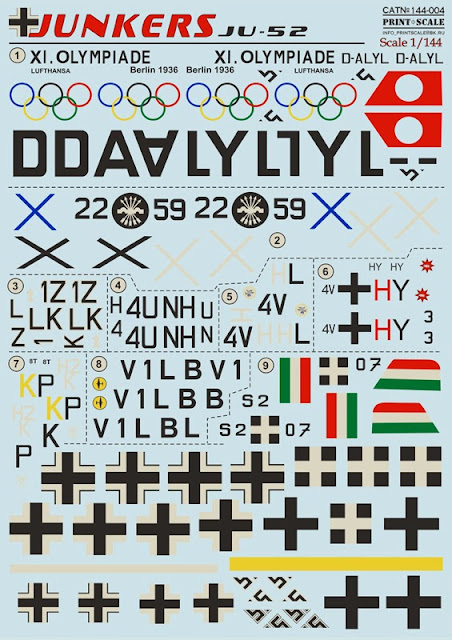 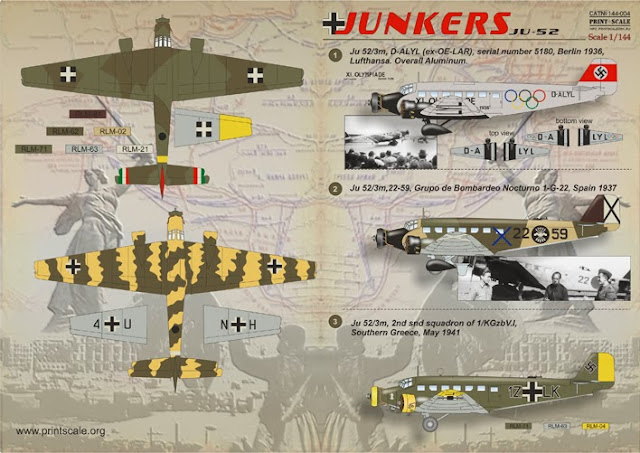 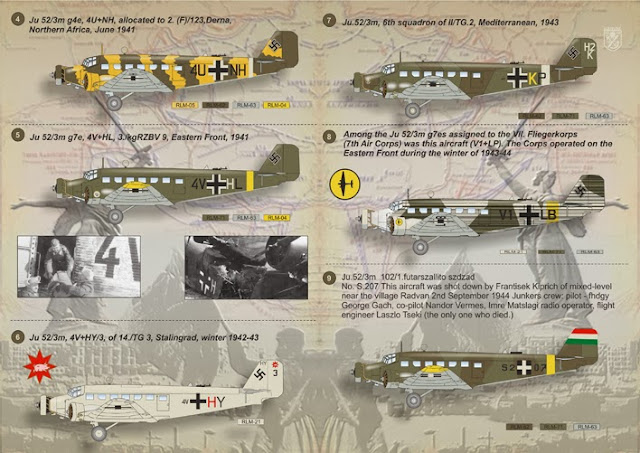 1/144 Ju-52 Decals by Print Scale
I thought I had featured this company before, maybe it was on the KG144 BBS?
Print Scale Decals based in Russia are quietly expanding their range of 1/144 decals and are definitely worth a strong consideration when it comes to deciding what scheme you are going to paint your next kit or repaint and existing gashapon! The review for the larger scales are positive and their use of colour and registration id well executed. 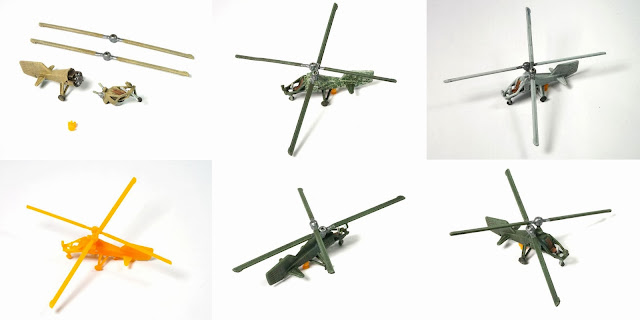 The helicopter went through no less than 23 revisions during development. V1 to V3 had a stream lined body and fully glazed cockpits. V5 to V12 had boxed fuselages and either open cockpit or semi-glazed cockpit.Open cockpit version was designated as B-0 and semi glazed version was designated as B-1. V21 and V23 were designed as two seaters with a nose design that resembled modern US Apaches, which was not a surprise because a surviving V23 was captured by the US by the end of the war.

After the war, Anton Flettner was brought to US as part of Operation Paperclip and became the chief designer of Kaman Aircraft and continued his development of helicopter such as K-1200 K-Max.

To facilitate shipment, the model will be shipped in five parts. Minor assembling required.

This model is based on Fl-282 V12 with open cockpit (B-0). Highly detailed features included detail cockpit and engine down to the eight blade cooling fan.

MKM14403  Westland Wessex HAS.1/HAS.31 (Royal Navy, A&AEE, Royal Australian Navy)
A British licence development of the Sikorsky S-58, the Westland Wessex was a multi-role all-metal helicopter produced by Westland Aircraft Ltd. The Wessex HAS.1, powered by a Napier Gazelle turboshaft engine, first flew in June 1958 and the type began performing anti-submarine duties three years later, operated by the Royal Navy. A more powerful version, the HAS.3, with improved avionics and a radome on the rear fuselage, was introduced in total, 140 HAS.1 helicopters were built, while 45 HAS.3 machines existed (all but three were conversions from HAS.1s).

In 1963 the Royal Australian Navy acquired a total of 27 Wessex helicopters designated the HAS.31A, of which 23 were later upgraded to Mk.31B standard, similar to that of HAS.3.

A review of this kit will be available later this month.

MKM14404   Westland Wessex HAS.3/HAS.31B  (Royal Navy, Royal Australian Navy)
A British licence development of the Sikorsky S-58, the Westland Wessex was a multi-role all-metal helicopter produced by Westland Aircraft Ltd. The Wessex HAS.1, powered by a Napier Gazelle turboshaft engine, first flew in June 1958 and the type began performing anti-submarine duties three years later, operated by the Royal Navy. A more powerful version, the HAS.3, with improved avionics and a radome on the rear fuselage, was introduced in total, 140 HAS.1 helicopters were built, while 45 HAS.3 machines existed (all but three were conversions from HAS.1s).

In 1963 the Royal Australian Navy acquired a total of 27 Wessex helicopters designated the HAS.31A, of which 23 were later upgraded to Mk.31B standard, similar to that of HAS.3.

This injection-moulded kit contains 44 parts and 6 clear parts (the cockpit canopy and the fuselage windows). A comprehensive instruction leaflet and a decal sheet are included.

A review of this kit will be available later this month.
Posted by bluedonkey99 at 18:38 1 comment: 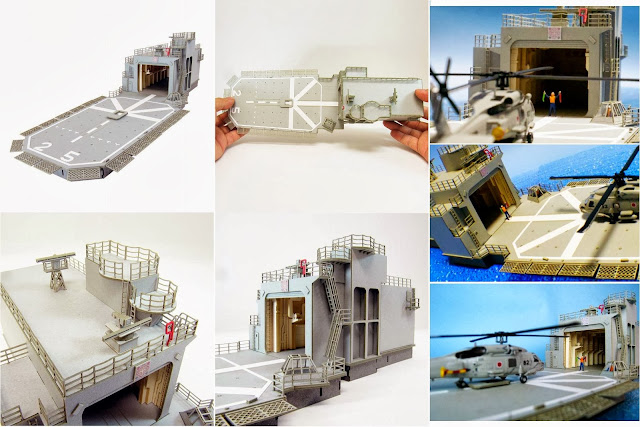 1/144 Hatsuyuki-class DD Helicopters Deck by Sankei
Sankei provider of excellent but expensive card kits had deviated from its line of airfield kits and has produced an impressive landing desk from one of the JMSDF ASW Destroyers. 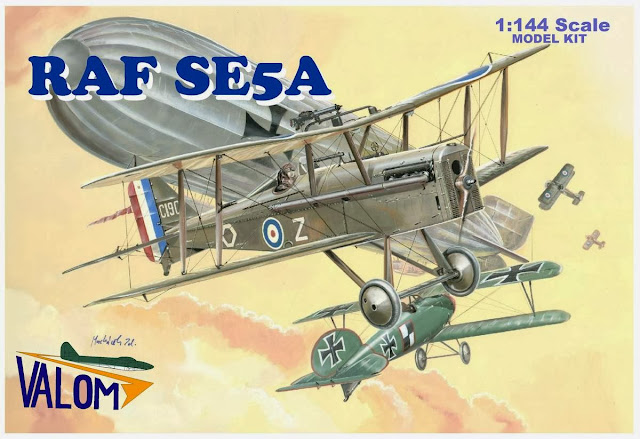 Valom have released another 'combo kit' into their WWI range, this time another classic the  Royal  Aircraft Factory SE.5A  as servied in the Royal Flying Corps. 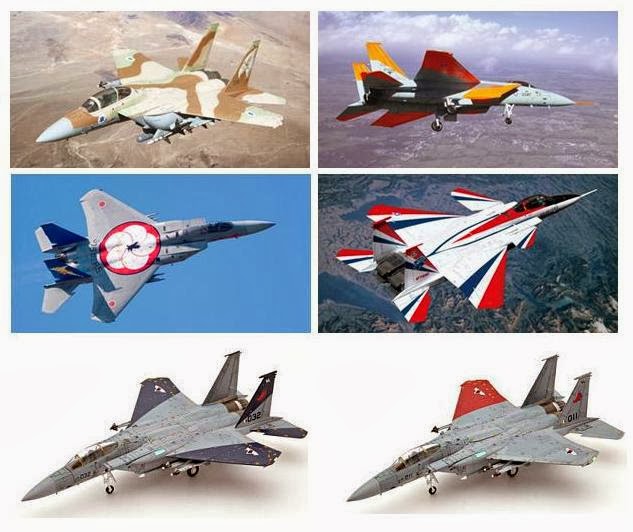 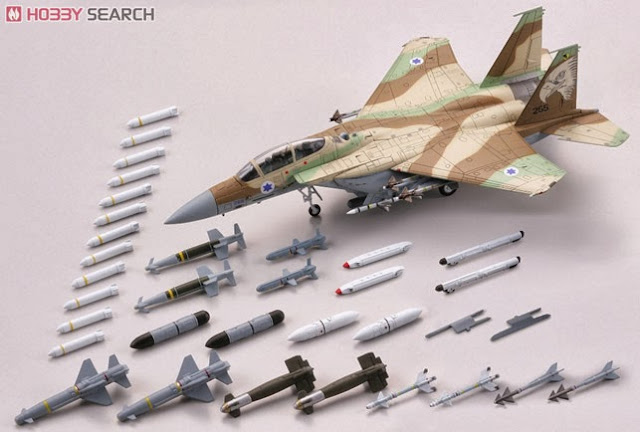 Anigrand have posted notice of their next 1/144 issue, and it will be the  US Navy Transcontinental Transport

You may recall that previous releases of the R3Y-1 in 'Tanker' mode, as opposed to this proposed release in 'Transport' mode... enough of a difference to justify a release? Did the original sell like hot cakes? 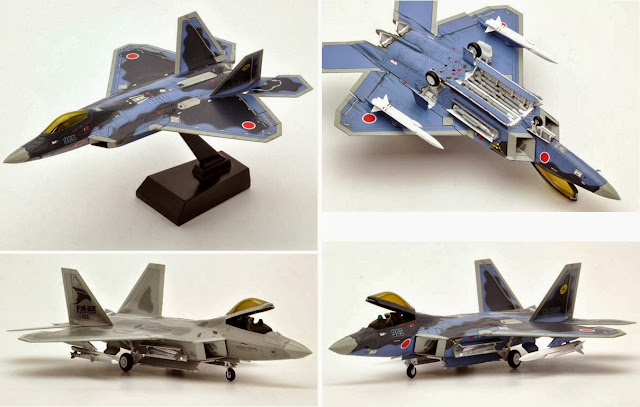 1/144 Tomytec Gimix F-22 Vol.2
This reissue of the Tomytec Gimix F-22 in a "What if" scheme that looks quite nice, at least its not grey and more grey. Fear not, those who like grey will be rewarded with the other release in this volume in an USAF Edwards Air Force base development scheme in grey....

don't forget that Tomytec will also be reissuing there Gimix F-15 in October 2013, this time in the guise of the Ace Combat Schemes http://www.tomytec.co.jp/gimix/lineup/ace/ace01-02.html
Posted by bluedonkey99 at 17:11 No comments: