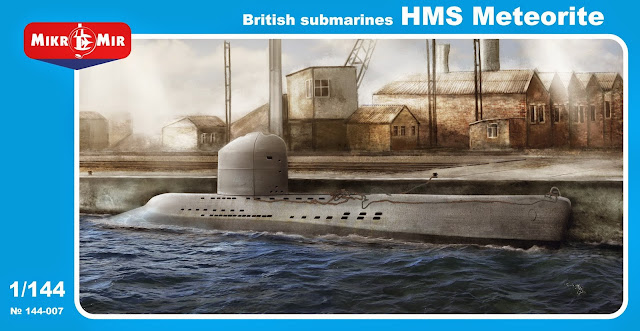 See site for sprues, decals (also has photo etch, not shown_ and interestingly an conning tower not used on this kit..)
http://mikro-mir.com/en/182.html

In the early 1930s Hellmuth Walter had designed a small, high-speed submarine with a streamlined form propelled by high test peroxide and in 1939 he was awarded a contract to build an experimental vessel, the 80 ton V-80, which achieved an underwater speed of 28.1 kn (52.0 km/h; 32.3 mph) during trials in 1940. In November 1940 Admirals Erich Raeder and Werner Fuchs (head of the Kriegsmarine?'?s Construction Office) witnessed a demonstration of the V-80; Raeder was impressed, but Fuchs was slow to approve further tests.

Following the success of the V-80's trials, Walter contacted Karl Donitz in January 1942, who enthusiastically embraced the idea and requested that these submarines be developed as quickly as possible. An initial order was placed in summer 1942 for four Type XVIIA development submarines. Of these, U-792 and U-793, designated Wa 201, were built by Blohm & Voss, commissioned in October 1943, and achieved 20.25 kn (37.50 km/h; 23.30 mph) submerged. The other pair of Type XVIIA submarines, U-794 and U-795, designated Wk 202, were constructed by Germaniawerft and commissioned in April 1944.

A further three boats (U-1408 to U-1410) were under construction, but were not complete when the war ended. Another six Type XVIIB's (U-1411 to U-1416) were cancelled during the war in favour of the Type XXI.All three completed Type XVIIB boats were scuttled by their crews at the end of the Second World War, U-1405 at Flensburg, and U-1406 and U-1407 at Cuxhaven, all in the British Zone of Occupation.
U-1407 was salvaged in June 1945, and transported to Barrow-in-Furness, where she was refitted by Vickers with a new and complete set of machinery also captured in Germany, under the supervision of Professor Hellmuth Walter. Because she was intended to be used solely for trials and possibly as a high-speed anti-submarine target, her torpedo tubes were removed.[3] She was commissioned into the Royal Navy on 25 September 1945 and renamed HMS Meteorite.

During 1946 Meteorite carried out a series of trials under the guidance of Walter and his original team from Germaniawerft, Kiel. The trials raised considerable interest in the possibility of HTP as an alternative to nuclear power as air-independent propulsion and the Admiralty placed an order for two larger experimental Walter boats based on the German Type XXVI, HMS Explorer and HMS Excalibur, to be followed by an operational class of 12 boats.
Posted by bluedonkey99 at 10:47 No comments: 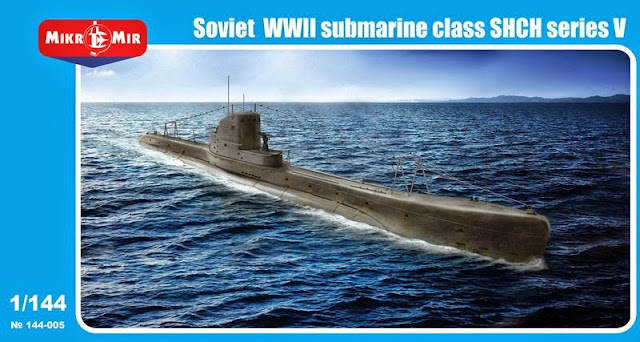 At the end of 1931 the Soviet government had decided to build for the Far East 12 submarines of the "Shch"  A series of submarines called - V series. The boat was a slightly modernized III-th series. Because of this basic technical elements submarines V series were the same as in boats III. The changes affected only the internal arrangement.

Submarines V series built at the Leningrad plant and finishing work in Vladivostok and Khabarovsk, where these boats were delivered by rail sections. Hull sections had joints, pre-prepared for subsequent riveting on-site assembly. Transportation sections was carried out on special rail transporters.

The first echelon with the sections of the first submarine V series built by Baltic plant was sent to the Far East June 1, 1932, t. E. In 5 months after the government's decision. During June-October 1932 all three plants were sent to the Far East all boats V series. Participation in hostilities, these boats are not accepted, but serve as a sufficient deterrent to the Soviet Far East
Posted by bluedonkey99 at 10:31 No comments:

Everyone is releasing each others kits this year! Following on from the F-Toys announcement, now comes more Beaufighters from Mark I.

The Bristol Beaufighter was a British long-range heavy fighter, developed early in 1939 from the Beaufort torpedo bomber. It became an efficient night-fighter, employing the then novel AI radar. Following short-term development the first prototype flew in July 1939 and the first aeroplanes reached the squadrons in the summer of the next year.

The Beaufighter was a two-seat, twin engine, all-metal mid-wing cantilever monoplane, fitted with a retractable undercarriage. It was powered by two Hercules radial engines and the armament consisted of four cannons in the nose, four guns in the starboard wing and another two guns in the port wing.

The Beaufighter Mk.IF was destined for RAF Fighter Command units, while the Mk.IC, fitted with an additional radio and navigational equipment, was a dedicated long-range fighter for the Coastal Command. Total production of both variants reached 914 aircraft.

The Beaufighter had a long career and served in almost all theatres of war during the WWII, at first as a night fighter, then as a fighter-bomber and eventually being used as a torpedo-bomber. 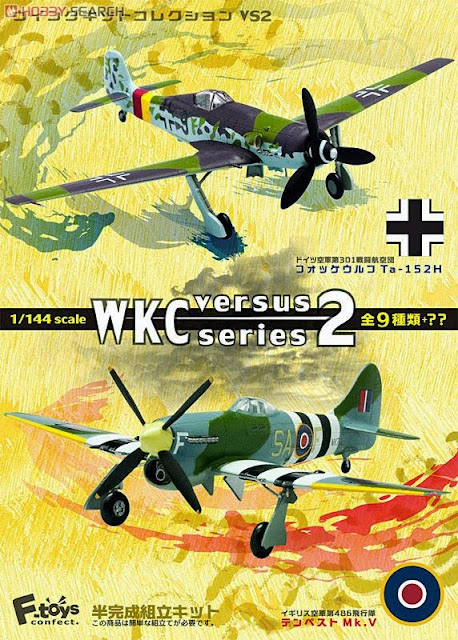 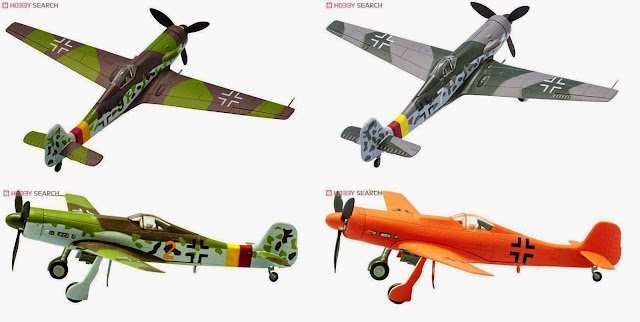 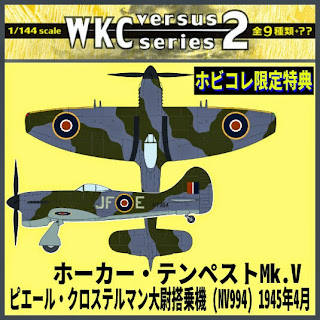 1/144 Wing Kit Collection VS2 - F-Toys
A great collection from F-Toys, some odd colour choices, but great to see the Hawker Tempest getting some exposure! It is good to see F-Toys commitment to the traditional releases, and I can't wait to see the next VS release. 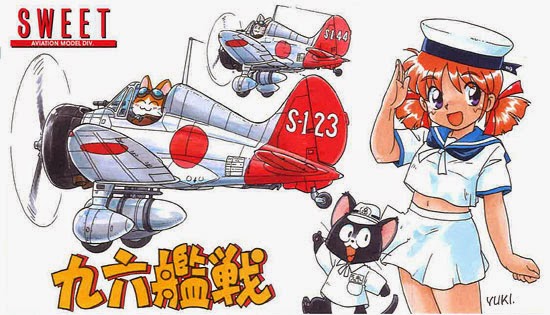 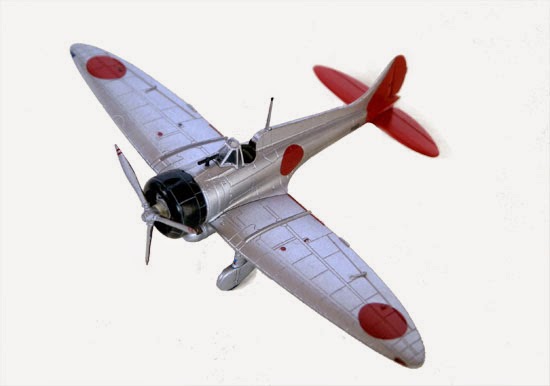 A new release from Sweet, and it is not a Zero! Hurrah!

Clearly, as a sweet kit it will be of the highest quality, and comes with cartograph decals and *should* be two kits per box!

http://en.wikipedia.org/wiki/Mitsubishi_A5M
The Mitsubishi A5M, Japanese Navy designation was "Type 96 carrier-based fighter" (九六式艦上戦闘機) was a Japanese carrier-based fighter aircraft. It was the world's first monoplane shipboard fighter and the direct ancestor of the famous Mitsubishi A6M 'Zero'. The Allied reporting name was Claude.
Posted by bluedonkey99 at 15:27 No comments: 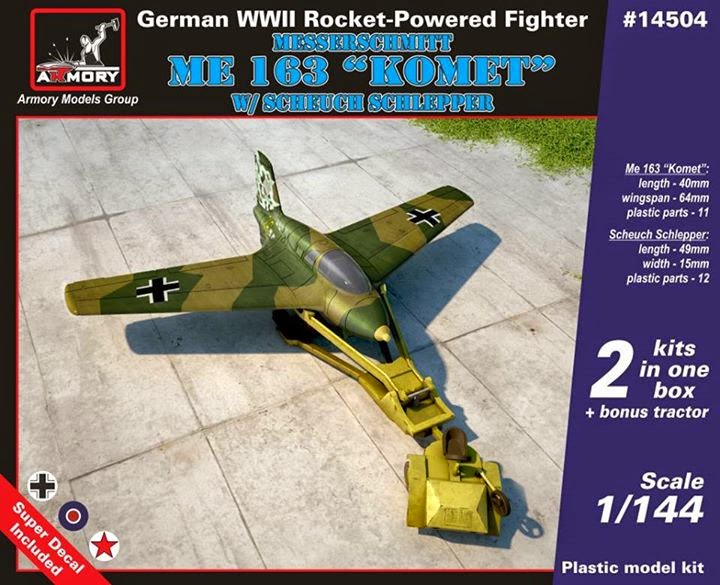 ARMORY have announced the expansion of  their great line of 1/144 items with a neat looking 2x Kit Me-163B with a bonus Schlepper (1x?). Coming with a nice looking set of decals to do various German,British and Soviet schemes - including a range of technical stencils.

Recent releases in this range have shown good quality and great prices.