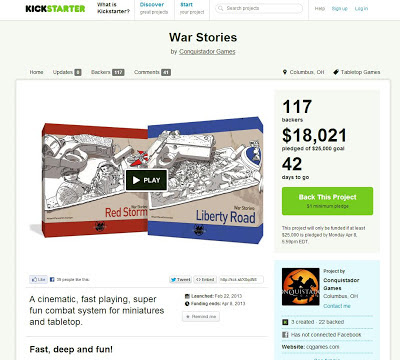 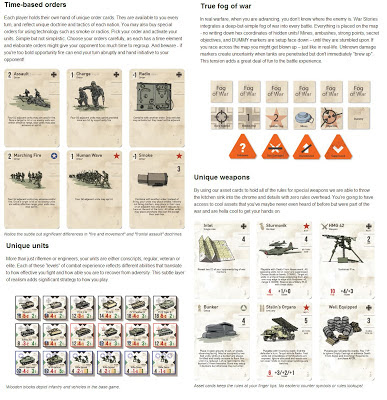 Is a card  War Gaming System by Conquistador Games is another wargaming project that looks to be a akin to the "wings of war/Glory" but card based and designed for miniatures such as 1/144.

They claim to be subsequently releasing a series of pre-painted miniatures "equal in quality to the WTM series"  - so, it remains to be seen if these will be WTM or plastic/metal alternatives!?

If you into your gaming and based in the USA, this could be a project for you!

Check out the Kickstarter Projects pages and the Videos at:
http://www.kickstarter.com/projects/1893407396/war-stories

There is a new creator on Shapeways by the name of Spectre Visuals who creating some interseting items.
I am particularly liking the look of some of the Panhard's (any chance of an AMX-13 or AMX-50? ) and the Unimog! I 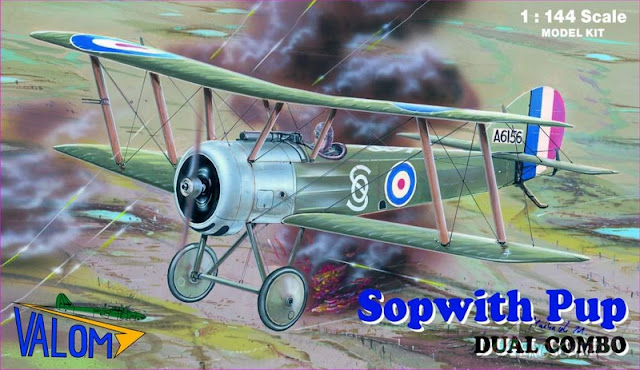 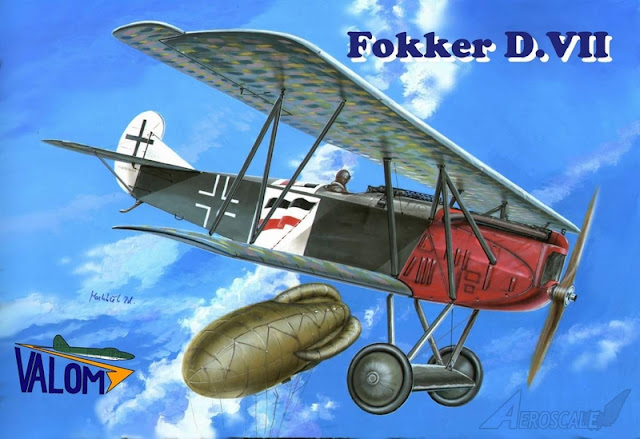 Valom have added to their prior What If release in 1/144 by expanding the range with these classic WWI fighters.

Should be great for modellers and Wings of War/Glory style war-gamers.

I have seen the Sopwith pub for sale on eBay and the Wings of Glory Site.
However Hannants has the Fokker is listed as a June 2013 release? So, we shall have to wait and see...
http://www.valom.net/modely_en.html 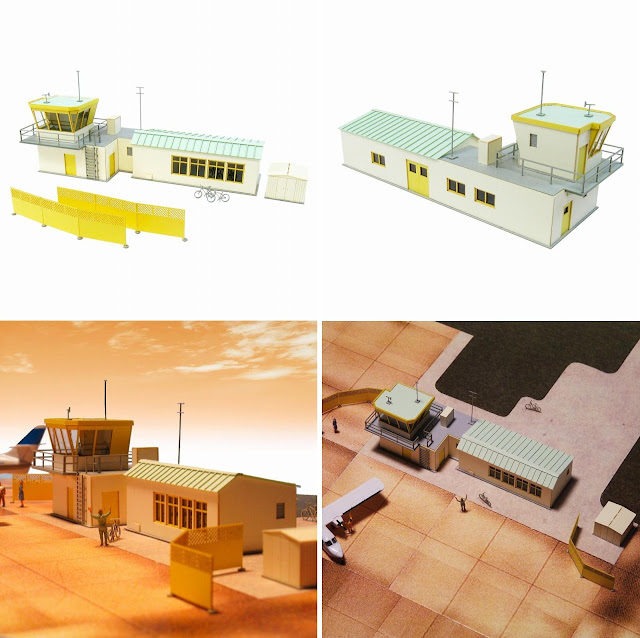 1/144 Flying Club - Sankei
A new diorama product from sankei, a "Flying Club", this should pretty much fit into any diorama around the worlf due to its generic design. Ideal for those no combat scenarios 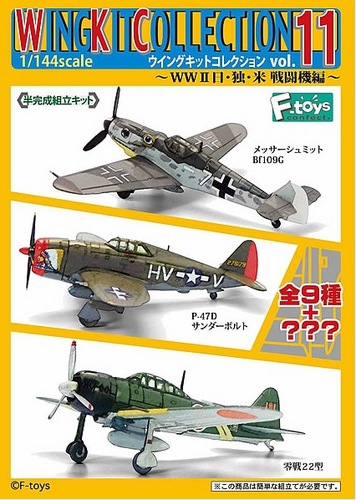 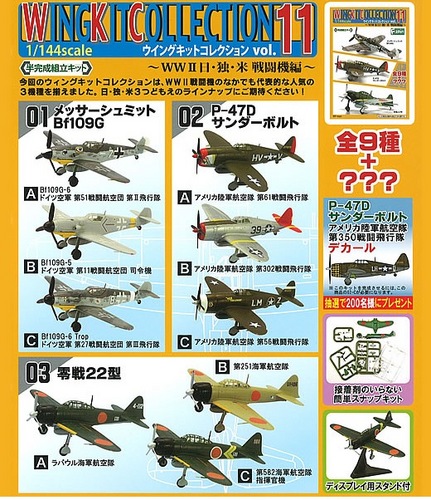 1-144 F-Toys Wing Kit Collection Vol.11
A new release (Est April 2013) of the wing kit collection with this mix of something old, something new and something borrowed? 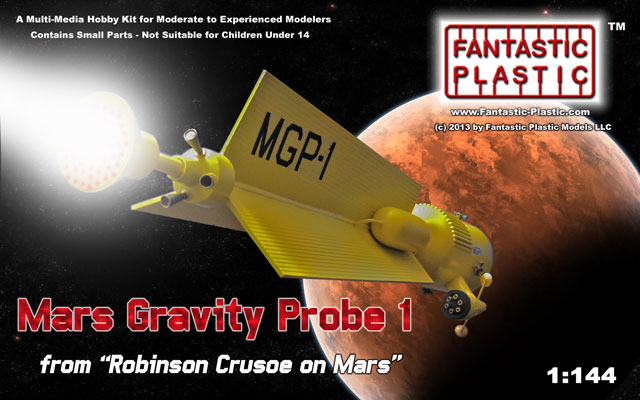 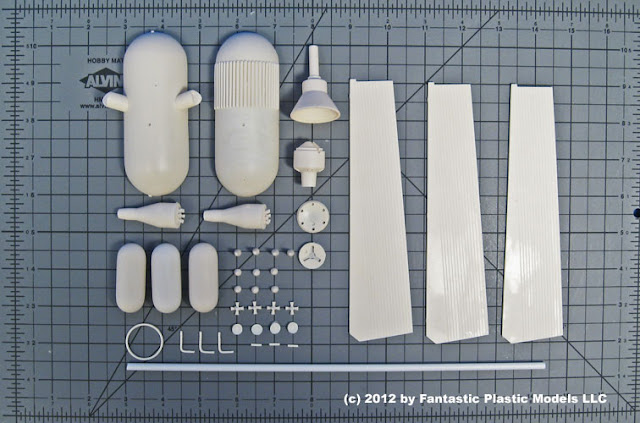 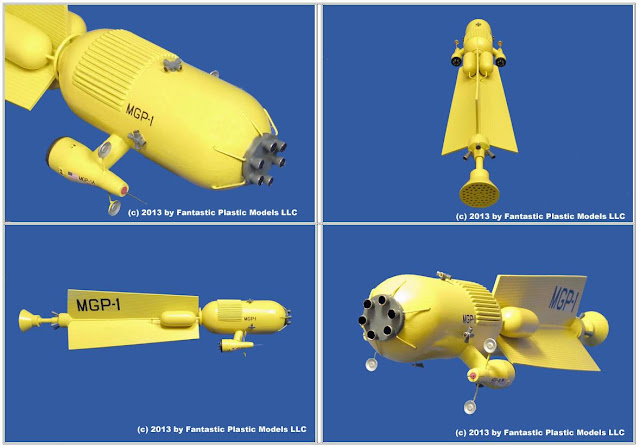 MGP-1 was an important step in cinematic spacecraft design as it was one of the first to incorporate design elements from actual NASA spacecraft then under development. These included four-nozzle Reaction Control System (RCS) thrusters, external fuel tanks and landing craft clear based on Project Gemini capsules.

A new set of Tomytec GiMix series aircraft, expect the usual high quality of the GiMix Range, with option for lighting tubes etc. (see link below for more) 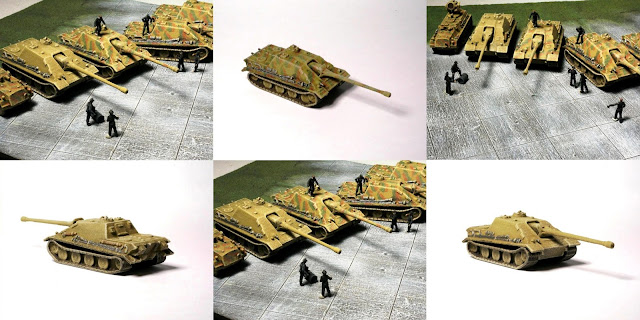 This is a new 1:144 German JgPz E 75 (Jagd Panther II) from the new Wargame Armour series of CGD. This item is fully painted in the 3 Colour Disruptive Camouflage scheme, or dunkelgelb and is  Weathered with no assembling required.

E 75 standard tank - In 1945, the German war machine initiated a development program (Entwicklung, or E) aimed at categorizing the development of AFVs in 5, 10, 25, 50, 75 and 100 ton weight brackets. The E 75 was designed to be between 75 to 100 ton and as a standard tank replacing the King Tiger and Jagdtiger. The tank was almost identical to the King Tiger in size but would be easier, cheaper and quicker to produce than the previous designs.

The E 75 shared a lot of components with the E 50 and has the same hull design and dimension. The E 50 has more space inside through using thinner rolled armour plate and hence lighter weight.

To handle the additional weight, the E 75 has an additional suspension unit with 2 more road wheels on each side. The E 75 used E 50's combat track as transport track and another wider track as combat track.
(Read more:http://en.wikipedia.org/wiki/Entwicklung_series)

This tank is modelled after a speculative drawing showing a Jagdpanzer developed from the E 75 chassis with an 128mm KwK 44. The gun compartment is in the forward postion of the chassis similar to Jagdpanther. This layout provides a roomier crew compartment than the JgPz E 50 ( and full access of the engine compartment during servicing. The drawback is the overall length of the tank is very much increased with the ever larger gun installed. Maneuvering in tight street corners will be very difficult 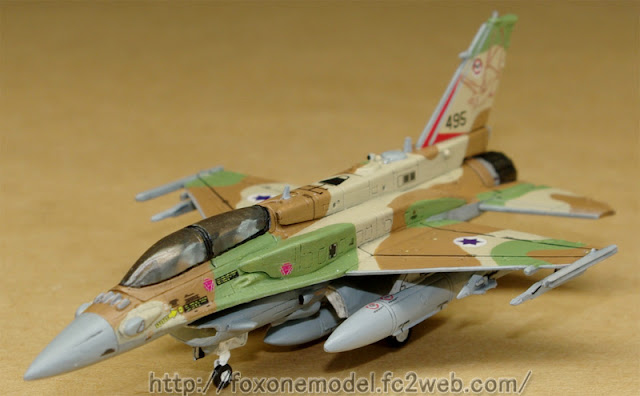 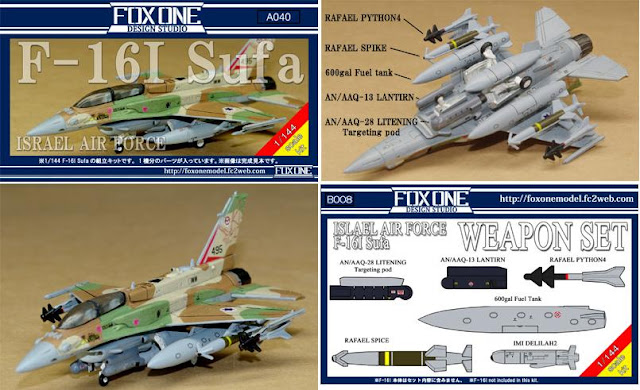 The F-16I's most notable difference from the standard Block 52 is that approximately 50% of the American avionics have been replaced by Israeli-developed avionics (such as the Israeli Aerial Towed Decoy replacing the ALE-50). The addition of Israeli-built autonomous aerial combat manoeuvring instrumentation systems enables the training exercises to be conducted without dependence on ground instrumentation systems, and the helmet-mounted sight is also standard equipment. The helmet-mounted sight, head-up display (HUD), mission computer, presentation computer, and digital map display are made by Elbit Systems of Israel.

Key American-sourced systems include the F100-PW-229 turbofan engine, which offers commonality with the IDF/AF's F-15Is, and the APG-68(V)9 radar.


This should soon be available from Radjapan and HLJ.

Weapons Set (Additional):
http://foxonemodel.fc2web.com/original/B008/original_B008.html
Posted by bluedonkey99 at 17:05 No comments: 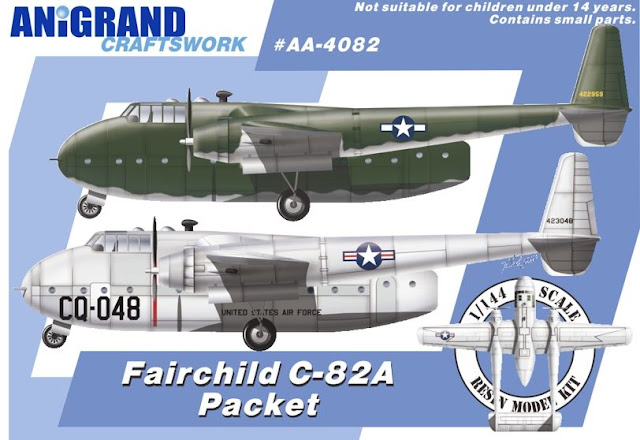 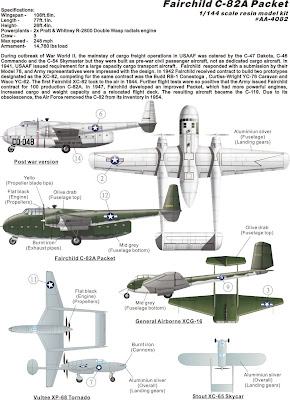 
Developed by Fairchild, the C-82 was designed as a heavy-lift cargo aircraft to succeed pre-war designs like the Curtiss C-46 Commando and Douglas C-47 Dakota. The aircraft was designed for a number of roles, including cargo carrier, troop transport, ambulance airplane and glider tow. The single prototype first flew on 10 September 1944. The aircraft were built at the Fairchild factory in Hagerstown, Maryland, with deliveries beginning in late 1945 and ending in September 1948.

First flown in 1947, the XC-82B would go into production as the C-119B Flying Boxcar. In the end only 223 C-82A would be built, a very small number for a production cargo aircraft of that era. Most were used for cargo and troop transport, although a few were used for paratroop operations or towing military gliders. During its brief operational life several C-82 Packets were utilized during the Berlin Airlift, primarily bringing large disassembled vehicles into the city.

In 1946 the US Postal Service explored the concept of flying post offices using highly modified C-82s which would operate similar to those on trains where mail would be sorted by clerks and put in bags and then transferred to trucks on landing.

In 1948 a C-82 was fitted with what was called track-gear which operated much like rear tractor like suspension on half-tracks that allowed landings on primitive dirt runways that had no asphalt or concrete surfacing.

Though itself unsuccessful, the C-82A is best considered as an early development stage of the C-119B Flying Boxcar. The C-82A saw limited production before being replaced by the Flying Boxcar. 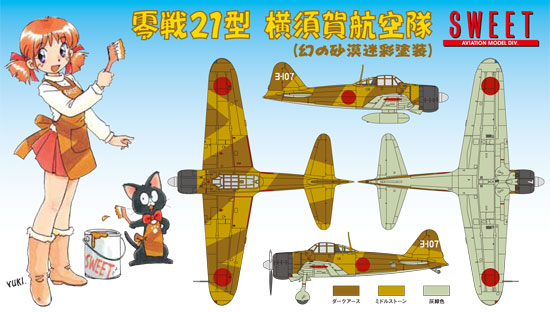