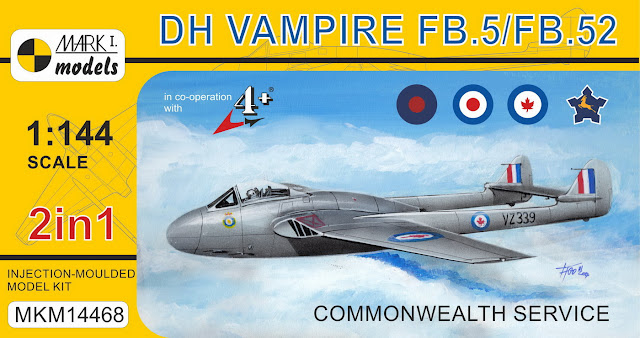 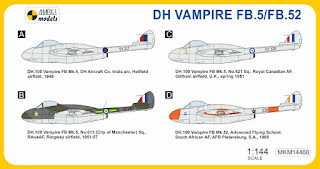 The de Havilland Vampire was a British jet fighter developed during WWII. It was the second jet, after the Gloster Meteor, operated by the RAF. The Vampire Mk.5, which flew in June 1948, was a fighter-bomber modified from a Vampire F.3 fighter.

It was a single-seat monoplane aircraft, of a combined wood-and-metal construction, powered by a DH Goblin turbojet. It featured twin-boom tail configuration with two wing-root intakes, bubble canopy and was fitted with a non-ejection seat. Two external tanks or 500lb bombs could be carried under the wing, while eight 3" RPs could be attached inboard of the booms.

The Vampire replaced wartime piston-engine fighters and was in front-line service until 1953. The Vampire FB.5 equipped many RAF squadrons in Europe, the Middle East and the Far East, and was supplied to other Commonwealth air force units.

Almost 3,300 Vampires of all marks were manufactured (of which 930 were FB.5s for the RAF and another 88 for export), a quarter of them built under licence in other countries. It was also sold to many nations and operated in a wide range of environments around the world.

Two injection-moulded kits are supplied in this box and each kit contains 31 parts and three clear parts (the cockpit canopy and position lights). A comprehensive decal sheet is included. 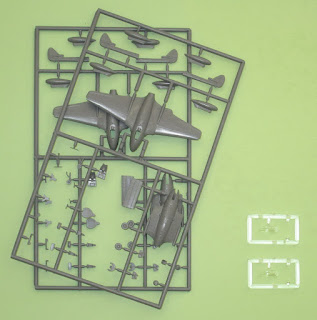 You can add the SRAF (1954) and subsequently the RhAF to the list as well. One airforce, two names, both with vampires and both in the commonwealth (until 1970).