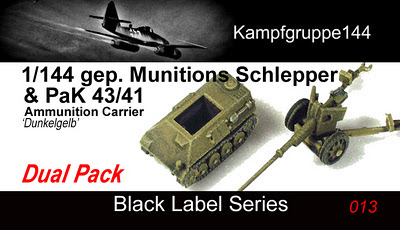 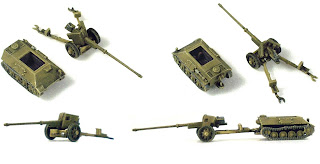 Gepanzerter Munitionsschlepper
The next KG144 release is an item  subject to many a debate and conflicting texts on the Internet, in part due to a number of companies being commissioned to produce designs, and also evolving those designs.

This configuration is based on various sources, and reflects closely the original brief issued to the Germand and Czech manufacturers for a pure munitions schlepper. It is presented here with a PaK 43 cannon.

In January 1943 the lesser known company “Weserhutte” was asked to design an armoured ammunition carrier (VK 501) for the Werhmacht. It was planned that mass production should start in 1944, however conflicting demand for resources on the German industrial war machine caused this to be delayed.

Designed to have a weigh 6 tons, it utilised the proven 6-Cylinder Maybach HL42 providing 100HP and a speed of 65 Kilometres per hour, transverse mounted. The armour thickness was specified at 20 millimetres, and was capable of stopping a 7.62 round.

The payload capacity was 1,000 kilograms providing a range of options:

At the time Rheinmetall was developing the Flak 41, the Krupp's company was also competing for production orders with their 8.8 cm Gerät 42 proposal. The Krupps design was not accepted for production as an anti-aircraft gun, however development continued and resulted in the dreaded 8.8 cm PaK 43 anti-tank gun and 8.8 cm KwK 43 tank guns.

Pak 43 (abbreviation of Panzerabwehrkanone 43) used a new single axle mount with the gun much closer to the ground, making it far easier to hide and also harder to hit. It was had a much stronger and more angled armour shield to provide better protection for gunners.

All versions this design were able to penetrate about 200 mm of armour at 1,000 m, allowing it to defeat the armour of any contemporary tank.