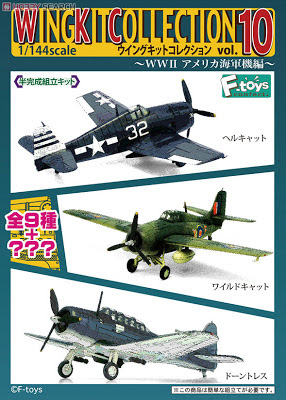 Great! Looking forward to the Wildcat!!!

Nice looking models, but I'm not really all that excited about them as they are all already available in kit form. And in the case of the F4F and F6F the kits are far better than anything we're likely to see from a trading plane toy... .
John

Really like the Wildcats; 3 useful schemes including the British Martlet version, which were commonly used for anti u-boat duties. The Hellcat is a great choice but not fussy about the schemes chosen...a nice 2 tone blue would have been a better choice than the French version..maybe it will be a secret version?

Would have preferred an Avenger to a Dauntless...i like the Cafereo one and their paint schemes are better too with Coral Sea and Midway versions.