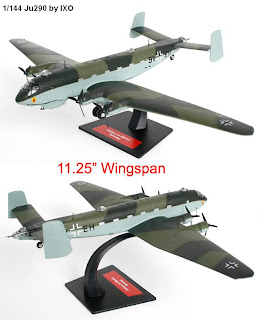 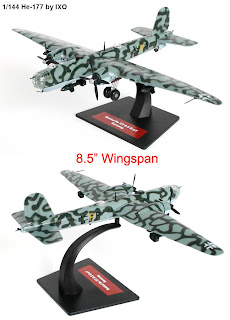 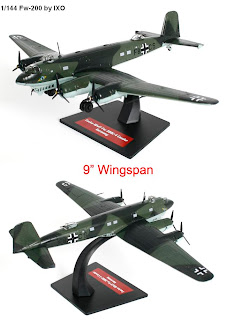 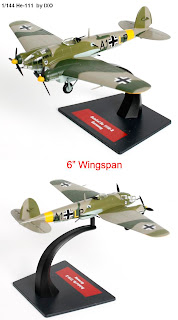 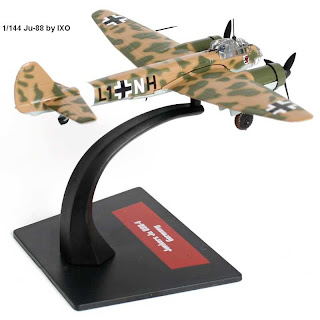 Martin,
hi.
AND where is an easy place to get these? HLJ, Ebay? Hannants?

All my purchases thusfar have been either directly or indirectly through eBay. This included a B-17G and He177 via a Spanish eBayer, and a Ju290, Wellington, Halifax and Cant Z1007bis from the Netherlands. as there now appears to be a glut of He177's, you can get them relatively inexpensively, but expect to pay in excess of $US30 for the Ju290 and Cant. Also check the postage rate, as some Europeans obviously hate sending anything outside their immediate zone!

Most of the aircraft depicted here are part of the 14-strong range released by Altaya in France and Spain as "subscription items" (in much the same way as Atlas Editions and Franklin Mint). It appears that IXO in China is the manufacturer. However, a number of items, including the Ju88, Ju188, Pe-8 and Bv222 are currently slated for release under the "IXO Junior" banner. Some US outlets such as Flying Mule and Trinkets to Treasures are taking advanced orders. These stores are setting the price between $US27 and $US30 apiece. Mind you, the principal of Trinkets was surprised to learn of the Altaya releases, as she had been informed that none would be released before Mar-Apr 2008.

At this stage, I would doubt HLJ will stock the items as they don't originate from a Japanese company (notwithstanding that most "Japanese" kits are now made in China). Hannants might, as they do stock Corgi.

Hello guys.Just recieved the BIG BIRD #3 set, including the the two specials, ( SKY WARRIOR and TURRETED SALLY), and six ALTAYA bombers. Ive always built my own models but these pre builts are very nice.Compared to the corgi Lanc, ( which will be going under the bed), the ALTAYA models are super. Good subjects too. I'm building the Hobby Craft B36 FICON at the moment and the XF-85 that is included is a little gem. I get my BIG BIRD , WING CLUB etc from 7TOYS7 (HONG KONG) and the ALTAYA from H.TERMAAT2 (NETHERLANDS) both on ebay. Both are virtually instant, 4 days or less to New Zealand. Postage is a killer, but cheaper than flying over to get them. LOL.

I agree taht IXO/ALTAYA are best overall, but can be pricey to get hold of without a country of origin subscription. the BigBird etc obviously come close as they are lots cheaper but the build quality can be variable.

and whilst CORGI is better than ATLAS, the more i see of either the less impressed i become.