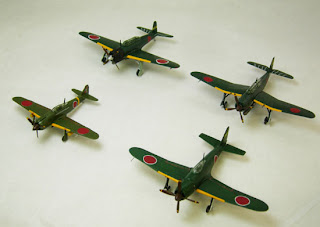 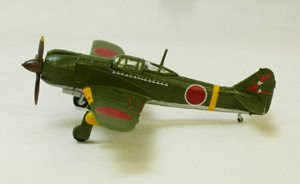 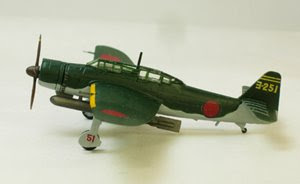 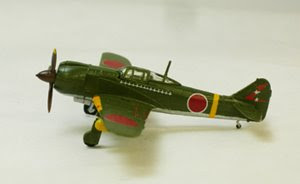 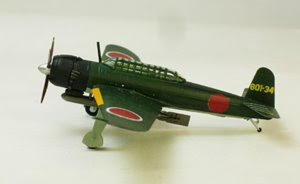 I am a fan of IJN aviation subjects but I cant help but feel Cafe-Reo is just cashing in on recent IJN interest.

And I wont be getting this set either because i'll end up with multiples of one type of aircraft, just like one of their recent Big Bird series when I got 4 Nells out of a box of 10 planes!

I am beginning to be wary of Cafe-Reo stuff as their quality can be shoddy.

Looking at the pics you posted, i can tell that some of the details arent that good. Look at the way some of the props hang off at angle, thats just sloppy tooling. And those horrible thick frames on the canopy... disappointing if you ask me.

I suppose you cant complain at a Japanese Company feeding domestic demand for IJN aircraft?

in the same way you cant blame Hollywood for portraying America winning the war single handed!

the points about poor quality and attention to detail are a different issue!

sometimes an excuse can be given that for the prototypes or paint samples there may be a few problems, on the other hand if the prototypes have been made at great cost you would expect them to be presented in top condition?

you maybe able to answer something i dont understand?
why are these an "IF" series, where they late war protoypes or only paper planes? did they actually see service during the war?

I would have thought there would have been more milage in them producing a popy luft'46 series if they wanted to make fantasy planes?

or even Euro/USA prototypes from the 40s-50s

Interesting observation regarding the name of the series. The “IF” series concerns aircraft that did fly, not largely “paper planes” like many of the Popy Projekt Flieger or Anigrand Luft 46 entries. Taking each aircraft in turn:

Mitsubishi A7M2 Reppu – The first A7M1 prototype flew on 6 May ’44, and another five were built. The sixth was converted to the A7M2 with an improved engine; it first flew on 13 October ‘44. Trials were favourable and the IJN ordered production, expecting the first deliveries in April ’45. However in December ’44, much of the production facility in Nagoya was destroyed by an earthquake. By cessation of the war, six more A7M2 prototypes had been built, as well as one A7M2 production machine, an A7M3-J Reppu-Kai high-altitude fighter and the first A7M3 Reppu.

Kawasaki Ki100 Goshikisen – The Ki61 Hien “Tony” was regarded as one of the best fighters produced by the Japanese in WW2, but the Kawasaki inline engine was in chronic shortage by 1944. The Ki100 was essentially a Hien modified to take a Mitsubishi Ha-112H radial engine. The benefits were in a fighter that outperformed the Hellcat and matched the Mustang when first encountered in combat in March ’45. The Ki100 eventually equipped eight Sentai; including prototypes, 395 were built by the end of the war.

Nakajima B6N Tenzan “Jill” – If 395 aircraft wasn’t enough, production of the Tenzan numbered 1,268 aircraft, including prototypes. The replacement for the B5N “Kate” as the IJN’s main torpedo bomber had an inauspicious start to its combat life, when Hellcats decimated the underpowered B6N1 in the Battle of the Phillipine Sea. The B6N2 was a slightly faster aircraft but, since most of the IJN’s carriers had been sunk by mid-1944, it was forced to operate from land bases and never achieved the success expected of it.

Aichi B7A Ryusei “Grace” – Another torpedo bomber, the Ryusei was first flown in May ’42 but due to engine delivery issues, only 105 were built between 1944 and the end of the war. The Ryusei was supposed to replace the Tenzan and the Yokosuka D4Y Suisei but, like the Tenzan, was forced to operate from land bases.

All of these aircraft have previously seen the light of day in 1/144. In the mid-70’s, LS issued the Reppu, Tenzan and Grace. Crown also produced a Ryusei, which was reissued by Minicraft in the 90’s and is still readily available. The Reppu has appeared in the Cambus “egg” series in 1/144, along with the Reppu-Kai. Mitsuwa have done the Tenzan and ARII the Ki100.

So … I guess “IF” is (i) no earthquake in Nagoya, (ii) more Ki100’s (which, I hasten to add, is JAAF, not IJN), (iii) more aircraft carriers, (iv) more Ryusei and (v) less Tenzans! And, for those of us who like a little variety in our camo schemes, we probably won’t get it with this series. IJN Green, anyone? At least if CafeReo had done a Ki102 “Randy” (which hasn’t been done in 1/144 to my knowledge), we could have added a bright purple model (a Ki102b of 3 Sentai) to our collection!

Well put smeg. I have a feeling this set will not sell all that well, and will remain on ebay for years to come. Perhaps the prices will be low enough that I'll even pick up a few, even though there's nothing new here as you noted.

And while we're at it, why is Cafereo releasing yet more F-18s? The new paintschemes alone cannot possibly compensate for their horrible quality. With such poor fitting parts, thick panel lines and substandard paint quality, Unless they improve their paint techniques and started using the new DML kits, why would anyone be interested in their relases? I still don't understand why I keep buying their sets. Oh wait, I know why. I'm a fool for anything in 144 even if I have no more shelf space left!

The only saving grace to the navy&marine freak set is the Viking and the Skyhawk. Although, Platz will be releasing A-4Ms hopefully sometime this year, which will definitely be superior in quality. I'm sure MYK will have decals for a host of squadrons soon thereafter. So that only leaves the Viking, to possibly reduce the price of the Ykraft & Triplenuts resin. It's about time for Dragon to release a proper S-3B.

I only hope that we don't get more F-4's as secret planes. I would welcome a re-release of the Blue Angels & Thunderbirds though, but that'll never happen!

Sorry to be off-topic, but I got carried away.

i think we are being to see your area off specialism!! A nice considce write up! I had noticed that canvas had done the reppu!

but as olicer said, but dull for the average westerner, obviosuly within Japan they got enough pre-orders to take a punt on this series?

as for the name of series - who can tell?

lets hope the next series are a little more lively?

apologoes to all the IJN lovers out there!

I'm one of those IJN lovers :)

I have to say though, even I am dissapointed with this selection.
I'd have been much happier to see some of the early war exotics and float-planes. A5M 'Claudes' or Jakes would have been most welcome. Not to mention the ki-27 for the army buffs. Ah well...

I think it is really nice to finally see a Ki100....the Goshikisen was perhaps the best aircraft the Japanese had at the close (the Hayate was arguably better....but was kind of the Japanese Alfa Romeo....). The others have all been covered in kit form by LS, and the Jill by Bandai. The good news is apart from pre/early war designs and some float-biplanes we must surely have covered off every IJA/IJN subject now :)

surely there must be some obscure Zero that we havent seen yet!?

on a more serious note, now that there seems to be some interst in WWI and inter-war years, maybe we will see some pre WWII IJA/IJN aircraft?

some of those IJA Gyro-coptors would be cool?