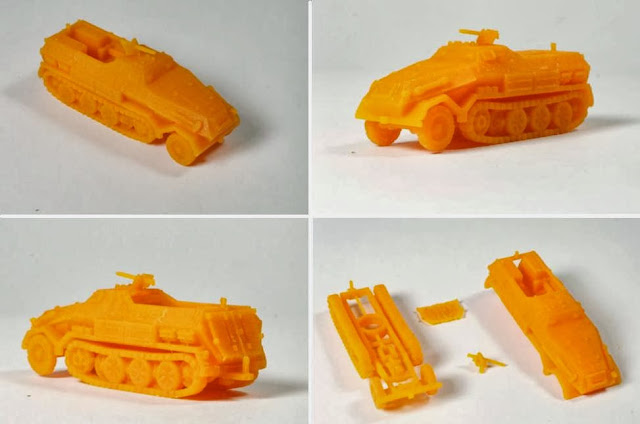 A new unpainted kit version of this items is available at auction :
http://stores.ebay.com/Combat-Group-Dynamix/_i.html?_fsub=4294345

The History
The history of this vehicle begins on January 18 1945 when it was lost while trying cross the Pilica River in Poland, becoming embedded in the sandy river bed. This vehicle is probably one of several prototypes of this variant for which the production has never been fully accounted.

While the history of the Sd.FKz 8 series dates back to 1934, the evolution and history of this particular variant is undocumented. It clearly shares a heritage of the Sd.Kfz 8 which was designed as a standard tractor chassis for the purpose of towing the 88mm Flak Cannon (and other large guns), this one however having alternative configuration with an armoured body with 12mm steel plates.

This vehicle was of late war production and served on the Eastern Front with a Luftwaffe unit, probably tasked with providing AA Flak duties utilising the mighty 88mm.

Interestingly, the original license plate WL 323863 was still with the vehicle when recovered from the river and identifies it as Luftwaffe Vehicle. This plate also differs to the license plate seen in other SDKFZ8 DB10 variants of this type, thereby giving weight to the argument that there was more than one of this type.

The first attempt to extract this from the Pilica River in 1957 by Polish Military Engineers was unsuccessful. It’s not clear if the vehicle suffered further damage as a result of this action?

In 1999 a group of Military Enthusiast were able to extract the 18-ton Vehicle and reconstruction was completed in 2003. The engine was further renovated and the vehicle was able to move under its own power by 2005. It was during this restoration process that the vehicle acquired its nickname of "Lufcik".


Fact or Fiction?
Although only one of these beasts have been found it is thought to have had a short production run of 20 – 30 units in this configuration. What we can see is that one unit has been recovered and restored in Poland and a small number of photographs exist of this configuration deployed in the field.

No official records have been discovered to reveal how many of these vehicles were completed, and it appears that this example is the only one to make it past the scrap merchant and into a museum.
This restored vehicle can be seen at the Pilica River Heritage Park in Tomaszow, Poland where you can actually ride as a passenger during the Summer Events!

Interestingly, the original Maybach engine was thought beyond economical repair, so it was to be replaced with a Russian Truck engine. However, on inspection it became evident that the later period Russian engine had very similar design to the Maybach engine (possibly a Soviet copy of the Maybach design) this allowed for an engine to be restored incorporating much of the original transmission and many other elements of the running gear...