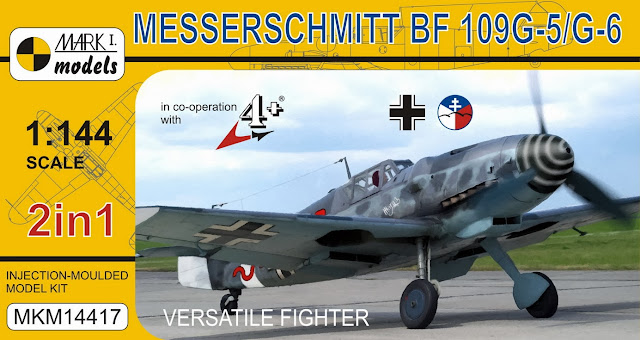 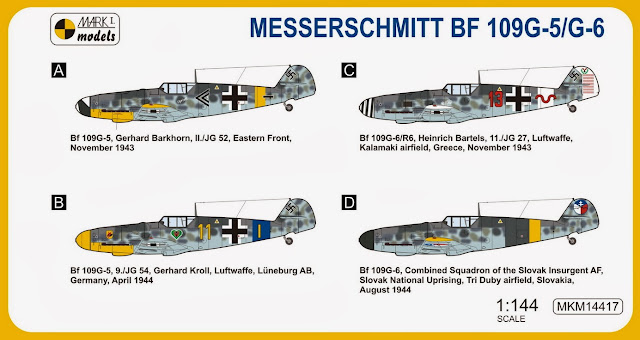 
MKM14417   Messerschmitt Bf 109G-5/G-6 (2in1 = 2 kits in 1 box)
(Luftwaffe, Slovak Insurgent Air Force)
The Messerschmitt Bf 109 was a German fighter aircraft designed in the mid-1930s. Powered by a Jumo and later by Daimler-Benz in-line engine, it represented the first modern fighter of the era. Originally conceived as an interceptor, later models were developed to fulfil various roles, such as bomber escort, fighter-bomber, day and night fighter, ground-attack or reconnaissance. Various armament modifications evolved in service, using pre-packaged or field kits. The aircraft was of an all-metal monocoque construction, featuring an enclosed canopy and a retractable landing gear.

The G-series aircraft were introduced in mid-1942. The initial variants (G-1 through G-4) differed only in minor details from its predecessor, the Bf , most notably in the more powerful DB 605 engine. Odd numbered variants were built as high-altitude fighters, while even numbered variants were air superiority fighters and fighter-bombers.

The Bf 109 was the most produced fighter aircraft in the aviation history, and besides the German Luftwaffe it served in many other air forces and gallantly fought in all aerial combats of WWII.


This injection-moulded kit contains 16 parts, 1 clear part (the cockpit canopy) and 3 resin parts (the cockpit interior and the wing bulges). A comprehensive instruction leaflet and a decal sheet are included.

Available for Pre-order at http://www.kits-shop.com/index.php  (run by Miniwing) and free worldwide shipping (November 2013)
Posted by bluedonkey99 at 19:58