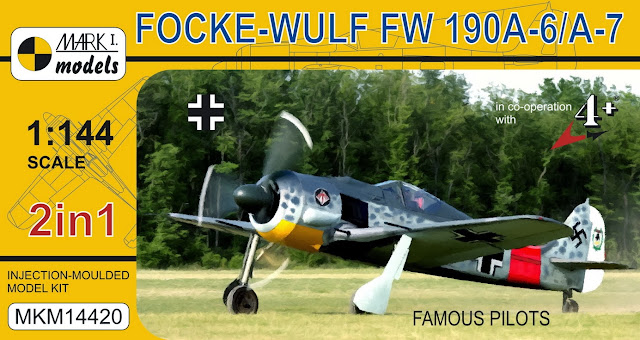 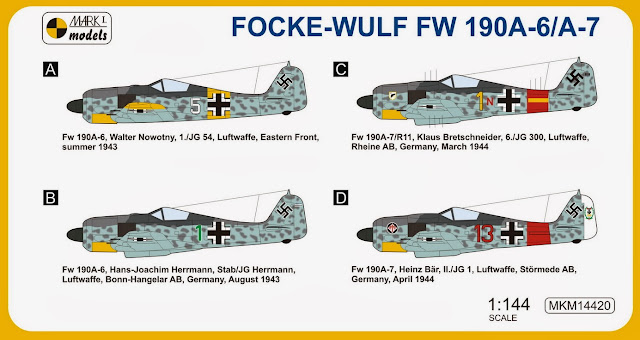 
MKM14420 Focke-Wulf Fw 190A-6/A-7 (2in1 = 2 kits in 1 box)
(Luftwaffe)
The Focke-Wulf Fw 190, designed in 1938, was a versatile German single-seat aeroplane which became the backbone of the Luftwaffe’ fighter force during WWII. Except its main role as a day fighter (A-series) it was also used as a fighter-bomber and ground-attack aircraft (F models). It was an all-metal monoplane powered by a BMW 801 radial engine.

The Fw 190A-8 was the most numerously built variant, which production reached nearly 1400 machines. The A-9 was the last A-model produced and was fitted with a more powerful engine and a bubble canopy.
Tha armament remained similar to that fitted to the previous variants, i.e., two fuselage machine guns and four cannons in the wing roots and outer wings, while a drop tank could also be fitted beneath the fuselage.

Both variants took part in the final stages of air war over Germany, hopelessly defending the remnants of the Third Reich.

Available for Pre-order at http://www.kits-shop.com/index.php  (run by Miniwing) and free worldwide shipping (November 2013)
Posted by bluedonkey99 at 20:24