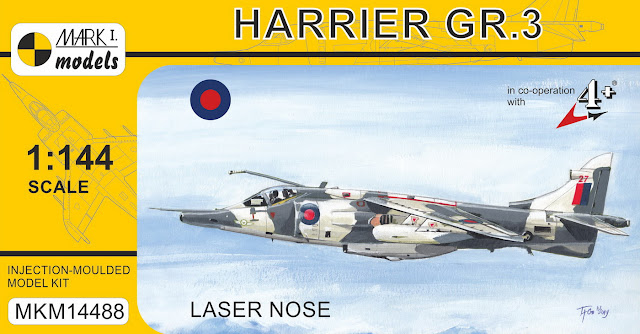 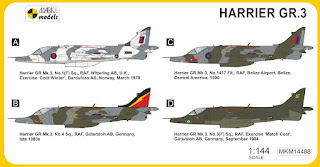 BAe Harrier GR.3 'Laser Nose' The Hawker Siddeley Harrier “Jump JetË� is a British V/STOL aeroplane developed in the 1960s. The initial version was the Harrier GR.1, based on the P.1127 (RAF) fighter, and its upgraded variant was the GR.1A. Another upgrade implementing more powerful and reliable engine resulted in the GR.3 model, at first externally similar to previous GR.1/1As. Beginning from the spring of 1976 upgraded avionics were fitted to GR.3s comprising the laser range finder in a lengthened nose cone and tail warning devices housed in the fin and tail cone. A total of 40 Harriers GR Mk.3s were built anew, with last delivered in late 1986, and about 62 were converted from the existing GR.1/GR.1As.
The Harrier was a single-seat fixed-wing all-metal monoplane powered by a R-R Pegasus turbojet, used for ground-attack, close air support, reconnaissance and fighter roles. It was fitted with two air intakes and four vectoring nozzles for directing the thrust generated by the engine. It had a tandem undercarriage and two outrigger landing gear units. External store hard points were installed for carrying a variety of weapons and external fuel tanks: two under each wing and one under the fuselage, while two Aden cannon gun pods could also be fitted beneath the fuselage.
During the type’s service the RAF operated the bulk of the Harrier fleet in West Germany as a defence against Warsaw Pact threat, but the Harriers were also deployed to air bases in Norway and in the former British colony of Belize. In 1982, Harrier GR.3s took part in the Falklands War, a 10-week hostilities between Argentina and the United Kingdom.

One injection-moulded kit is supplied in this box; it contains 53 parts and one clear part (the cockpit canopy). A comprehensive decal sheet is included.