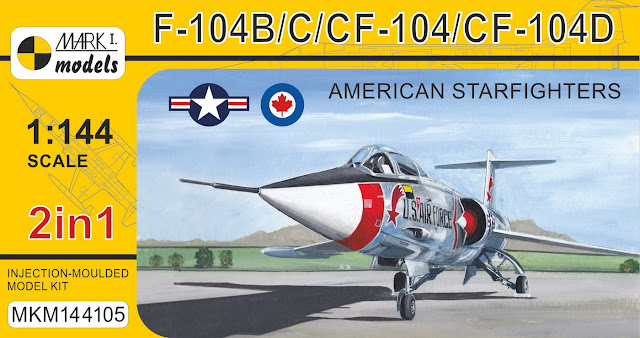 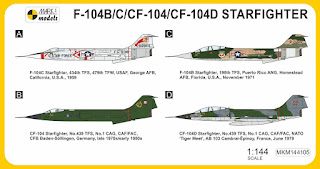 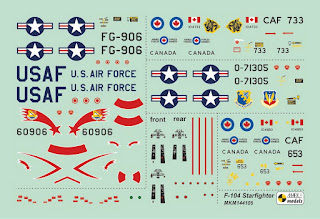 Lockheed F-104B/C/D/CF 'American Starfighters' (2in1) Mark I Models
The F-104 Starfighter was an American jet fighter, designed by the Lockheed Aircraft Company in early 1950s. Radical in concept, it was the first operational interceptor capable of sustained speeds above Mach 2. Its prototype flew in 1954 and the first series aircraft were delivered four years later.
The F-104C was the second single-seat version and was configured for tactical strike missions. This model featured a more powerful engine, removable in-flight refuelling probe and could carry bomb and/or rocket pods on underwing and fuselage pylons. 77 aircraft were built and delivered in 1958-59.

The CF-104 was a Canadian-built single-seat Starfighter, similar to the F-104G. It was fitted with a locally-built engine and equipment, including a refuelling probe. In total, 200 CF-104s were manufactured and they mainly served with Canadian units in Europe in the period from 1962 to 1986.
For combat training the F-104B dual-control Starfighter was designed. Its cannon was removed, electronics relocated, but provision for underwing and wingtip drop tanks and Sidewinder installation was retained. 26 F-104Bs were delivered in 1957-58. The CF-104D was a two-seat trainer, similar to the TF-104G, built by Lockheed for the RCAF and powered by a Canadian engine. 38 aircraft were built in 1962-64, of which the last 16 were fitted with slightly different equipment and designated CF-104D Mk.2.

The F-104 was an all-metal mid-wing monoplane powered by a J79 turbojet. It had two fuselage-side air intakes, small thin wings with a pronounced anhedral and a T-tail. Its nose undercarriage retracted forward on single-seaters, while that of the two-seat version retracted rearward. The CF-104s and the two-seaters had the fin area increased, compared to that of the C model. The F-104C/CF-104 also mounted one multi-barrel gun in the nose and two Sidewinder missiles at each wingtip.

The Starfighter had only a relatively short career with the USAF, but it became the backbone of a number of NATO and Allied air forces, serving all over the world from the 1960s well into the early 2000s.

Two injection-moulded kits are included in this box; single- and two-seater kit contains 41 and 43 parts, respectively, and one clear part (the cockpit canopy) for each model. A comprehensive instruction leaflet and a decal sheet are included.