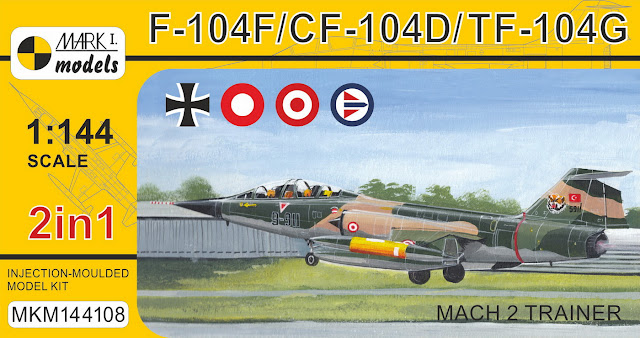 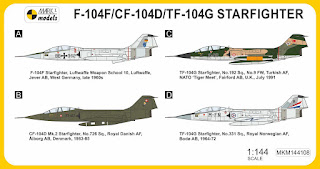 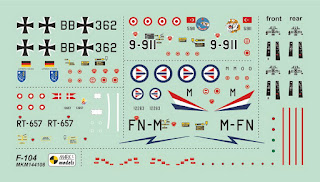 Lockheed F-104B/D/F/TF Starfighter 'Mach 2 Trainer' (2in1) Mark I Models
The F-104 Starfighter was an American jet fighter, designed by the Lockheed Aircraft Company in early 1950s. Radical in concept, it was the first operational interceptor capable of sustained speeds above Mach 2. Its prototype flew in 1954 and the first series aircraft were delivered four years later.
The first two-seat trainer was the F-104B, which was designed for the USAF and flown in 1957. The next two-seater was the F-104D, based on the single-seat tactical strike F-104C. In 1959, a two-seat
F-104F was developed from the D model for training and produced by Lockheed for West Germany. Thirty aircraft of this type were produced in 1959-60. The CF-104D was a Lockheed-built two-seater (similar to the TF-104G), ordered by the RCAF. 16 of 38 ‘CF’ trainers poduced were fitted with slightly different equipment and designated CF-104D Mk.2. In 1971-73, seven former Canadian CF-104Ds were transferred to Denmark after having brought up to TF-104G standard. The TF-104G was a two-seat combat trainer, of which 220 were produced by Lockheed in 1962-66. Four TF-104Gs were supplied to Norwegian Air Force in 1963 and they were phased out of service early in the 1980s. Turkey utilised a total of 54 TF-104Gs, of which 36 were former German aircraft, supplied in the 1980s. This type was retired from Turkish service in the early 1990s.

The F-104F/D/TF-104G was a two-seat, all-metal mid-wing monoplane powered by a J79 turbojet. It had two fuselage-side air intakes, small thin wings with a pronounced anhedral and a T-tail. The fin had an increased area and its nose undercarriage retracted rearward. It was disposed of the nose-mounted multi-barrel gun, but some could carry two Sidewinder missiles at each wingtip.

Early Starfighter two-seaters were primarily used for pilot training, while the dedicated TF-104Gs were also combat-capable. Alongside the single-seat F-104s they served with all NATO and Allied air forces all over the world from the late 1950s well into the early 2000s.

Two injection-moulded kits are included in this box; each kit contains 43 parts and one clear part (the cockpit canopy). A comprehensive instruction leaflet and a decal sheet are included.