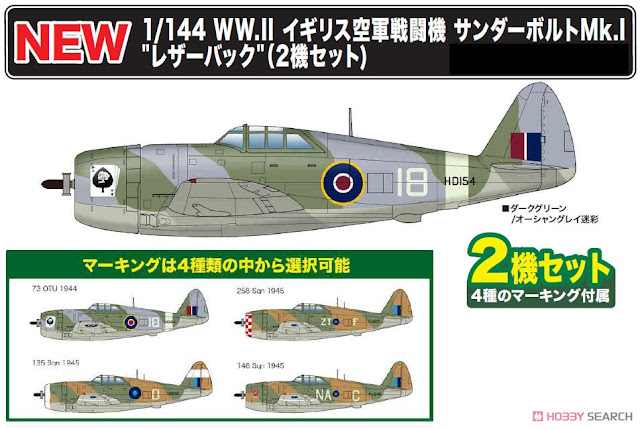 [About the actual machine]
--The P-47D Thunderbolt is a large fighter developed, deployed and operated by the United States Army during World War II.
--The engine is equipped with the R-2800 air-cooled radial 18-cylinder engine that produces 2000 horsepower, which was the strongest at that time.
――Equipped with an exhaust turbine, it boasts excellent high altitude performance and a maximum speed of 690km / h.
――First flight in May 1941, and appeared on the European front from 1943.
--Initially, he was assigned to escort a strategic bomber unit heading for bombing from Britain to Germany, but when the new P-51 Mustang was deployed, it shifted its role to a ground attack that made use of a sturdy aircraft, and the war ended. Was active.
-Also adopted by the Royal Air Force because of its high performance. Among the most representative types of D type, the early production type `leather bag` was operated as Thunderbolt Mk.I.
――The late production type `Bubble Top` was also operated as Thunderbolt Mk.II.
--The Royal Air Force Thunderbolt advanced mainly to the Indian-Burma battlefield in the latter half of World War II.
――We fought a ground attack on the Japanese army deployed in the same area and an air battle with Japanese army fighters such as falcons and dragons.
[About the model]
-The model is a plastic model assembly kit that reproduces the fighter Thunderbolt Mk.I operated by the Royal Air Force in World War II on a 1/144 scale.
――Among the various types, we modeled a type of aircraft called the `leather bag` with the canopy integrated with the rear fuselage.
――The shape of the body with a sharp back, which is a feature of the early production type of D type, which is the origin of the name `leather bag`, is also realistically reproduced.
-Marking is prepared for 4 types of aircraft belonging to the Royal Air Force. We can manufacture both the dark green / ocean gray camouflage aircraft, which was the standard paint for British fighters in the latter half of World War II, and the dark green / dark earth camouflage aircraft, which was the standard paint for the Asian battlefield.
--In the Asian battlefield, a blue / light blue nationality mark is also available to prevent misidentification as the Hinomaru.
――It is a set of two aircraft that you can enjoy not only the chic charm that is different from the original US Army Thunderbolt, but also the unique charm that is a bit different from the standard British fighter.
[Major features]
-A plastic model assembly kit modeled on the Royal Air Force fighter Thunderbolt Mk.I, which was active in World War II.
--The finished length of the aircraft is 76mm
--Includes parts for 2 machines
--There are 4 types of markings
--Both dark green / ocean gray camouflage and dark green / dark earth camouflage can be produced.

( This is a machine translation. Please allow for possible misinterpretations in the text.)