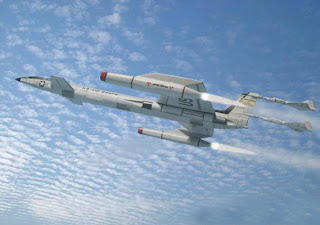 1/144 Convair XAB-1 (1958) - By Fantastic Plastic
=====================================
In the 1950s, America's defense industry explored several radical ways to gain air superiority over the rival Soviet Union. Convair's XAB-1 concept bomber employed two notions that were particularly fashionable during this Cold War period. One was the idea of atomic engines, power plants that could keep a plane airborne virtually indefinitely
.
Price: TBD $
Availablity: January 2010 (who needs anymore socks for Christmas anyway!)
.
http://www.fantastic-plastic.com/ConvairXAB-1CatalogPage.htm
.
This will be a proper 1/144 version of the following HAWK kit in 1:188 - the following should at least give you a good appreciation of what the kit will look like
.
http://www.fantastic-plastic.com/XAB-1%20BETA-1%20PAGE.htm
.
Posted by bluedonkey99 at 20:48

This is a definite must have model.

I've got the 1964 Hawk re-release (the second most expensive kit I ever bought via Ebay) but I have a serious wish for at least two of these - one as a "standard" USAF machine and another as a Gerry Anderson "World Airforce" bird.