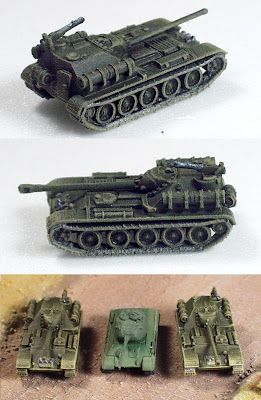 Soviet Weaponry is often the poor relation in terms of 1/144, not only in aircraft but also armour. Even more so when presenting some of the more exotic or late planing items. The item presented here is more than just a paper panzer and was scheduled to enter full production, in which case it would been a tank killer with the job of hunting down those late ware German projects....

SU-101 / SU-192 - was an experimental vehicle designed by Uralmash design office in autumn 1944 to spring 1945 to replace the SU-100. Based on the T-44, it was special designed to deal with the ever increasing length of guns on vehicles to counter thick German armour, which make tank destroyers and self-propelled guns difficult to maneuver in cities. The tank had engine mounted sideways and in front, significantly shortened the overall length of the vehicle, which also provided additional protections for the crews.

The crew compartment was also had more room for additional ammunition. The SU-101 carried an 100-mm D-10 tank gun. The SU-102 carried an 122-mm D-25-44S tank gun. The crew compartment has less room compared to the SU-101 because of the bigger gun and ammunition. Although successfully passed factory tests with high performances, it was not mass produced as WWII came to an end. A surviving vehicle was displayed in Kubinka Armor Museum, Russia.