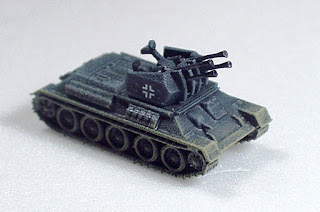 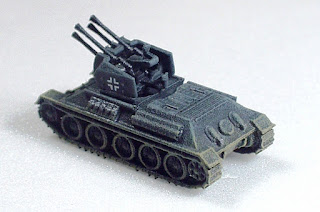 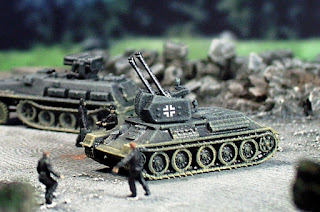 1/144 T-34(r) Flakpanzer  - CGD
The Germans were happy to reuse captured vehicles and armour in support of their forces and these were called "Buetepanzer's", although this could be dangerous it helped feed the insatiable demand the German war machine had when fighting on the Eastern Front. Although clearly this was not always popular with German soldiers who risked being attacked by their own comrades and the Luftwaffe...

Flakpanzer T-34(r) - or 2cm Flakvierling auf Fahrgestell T-34(r), was an interesting vehicle modified form Captured T-34 tank by the Germans. It was a field modification by Werkstattkompanie 653 using armor plates from damaged half-tracks. This vehicle provided anti air cover for the headquarter of schwere Heeres Panzerjaeger Abteilung 653 in early 1944.

The gun barrels can be elevated and turret transversed, and comes assembled and prepainted