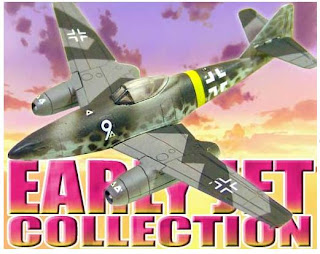 Didn't take long for Radsan and 7Toys7 to offer these on evilBay. The latter already has the some of the specials going at $US25.

I wish F-Toys used Takara's mold for the ME 262. To me, Bandai's mold leaves a lot to be desired. Not sure I'm happy with the execution of these jets (build quality in general), though most of them are the only ones available in the market in 1/144. Maybe they'll be better in person?

Are people on ebay braindead or just unable to do basic math? I see the gashapon specials go as high as $50 every once in a while and I just don't get it. Buy a box of 10 and get a special plus 9 other kits. It's the same as paying these outrageous prices on ebay. Dumb dumb dumb!!!

By the way, F-Toys = poor fit with lots of seems and gaps and average paint quliaty. It's always been this way and will most likely never improve unless you're willing to pay double/triple the cost per kit. I mean, you can get a box of 10 for 3800yen, which is dirt cheep, so so don't expect Takara quality. I keep going back to the F15s for inspriation!

F-Toys's only claim to fame is that they're the only guys releasing subject matter never covered by anyone else other than garage resin, or anyone else for that matter. We can finally get Meteors and V1s for a good price. If you want to actually display the kits however, take out the knife, pliers and tweezers and disassemble the kits. Break out isopropyl, break fluid, gas tank water remover, and quite possibly stronger material with ketones. Soak the parts to strip off the paint. Put them back together properly and use decals from either MYK, Liliput, Starfighters, FCM, Canmilair, Roseridge, Extradecals, or any of the other dozen or so aftermarket sets.

Turn these candy toys into proper models! By the way, has anyone actually tried the candy/gum that comes with the kits? I'm not too adventurous, so I just keep them in a jar.

The gum is usually ok, if you et it with new releases... I would advise against eating the gum from something as old as WTM03!

Bandai did some sweets with a hole in the middle.... avoid those...

Also, Takaras amazing weapons had "bubble bath" not sweets... (no I didnt try it to find out!)
or, was it chocolate drink?

I remember the WTM "rockies"candies .And that mysterious thing with Amazing weapons(I don´t opened)..
Every month I check the Takara HPG with crossfingers waiting for a "surprise" new boxset of Famous Airplanes of world but I think is dead...as Popy Projects
So we have lucky in still have F-toys and Cafereo.
I just discovered the F-toys later release the UsNavy collection have a easy to remove paint,my low vis A-7E is on bare plastic using only alcohol...is nice... because I ruined a Kawasaki T-4 using Acetone...
And F-toys Wing kit collection J7w paint is removable too..

I think takara are behing the "Century wings" jets?

you may find this comparison interesting.

the F-toys mould appears more in keeping with the bandai mould than takaras. However they are i not i feel the same. differences in the legs of the undercarriage and central wheel wells would suggest different moulds?

Theae 3 me-262 are made from diferent molds they have diferences in landing gear bay..
and in my best rebuilds I used Bandai Me-262s .

Badger, I hear what your saying, but I think the people that are paying $50+ on a mini are People that live in N.A. I look at the prices of stuff that is sold in N.A. on ebay and most of it is $10 or more than that of a seller in Asia. Reason people will pay more for these kits? Well we don't see these things on a regular basis in North America. The first time I saw 1/144 scale trading kits was in 2002/3 at a hobby store. The same store has now gone under and I have yet to find another who sells them for a REASONABLE amount. I really wish this phenomena was more available in North America, as we who are modelers or gamers are getting hosed. I mean $15.00 for a kit that probably cost, what $2 for a person in Japan or China? Not only that, if you game with them, well then you need multiples and that equals BIG BUCKS. I guess the only option is to buy through HLJ.com which I'm a bit iffy on or find a "Pen Pal" in Asia to trade with. Anyone wanting to do so, PLEASE drop me a line :)

As for the Gum or Candy, the only Candy I got was with the Bandai Wing Club and it was rather, lemony. I didn't get sick or anything so it must have been O.K.

"Bandai did some sweets with a hole in the middle.... avoid those..."

These were cool. They are actually a whistle as well. Great whistle....crappy lolly :-)

F-Toy quality sucks, but it does suck a fair bit less than their early stuff....remember Acrojet 1....shudder.

Has anyone actually tried Brake fluid on F toy kits? I've used the Isoproponal and it only seems to work on Takara and CafeReo kits. I've thought of using Brake Fluid but and experiment I did with it YEARS ago softened the plastic to the point it fell apart.

Yes, I used brake fluid in Acroteam f-toys..don´t worked... baked soda or oven cleaner don´t work too...
Only acetone (Cutex) worked ..but it melt the plastic I did in my bandai me-262 and T-4
The later f-toys series like Usnavy collection and wing kit collection the paint is removable wiht isopropil(alcohol).. I tested with sucess in A-7D(low vis) and J7w1(that one I build for Martin as Luftwaffe 46)

On the matter of solvents for removing paint from trading minis, you should always avoid ketones like acetone and MEK, and esters like ethyl acetate, as these dissolve a wide range of common plastics. If you haven't anything dispensible to try a solvent out on, stick to modelling paint thinners or alcohols like 2-propanol (also known as isopropanol or isopropyl alcohol).

Oh, and if you are a smoker, don't perch a lighted cig nearby unless you want a molten model collection and second degree burns! ;-)

Going back to Badger's comment on evilBay, I couldn't agree more regarding the prices people pay for some of the specials and, for that matter, the ordinary stuff as well. However, I can also see Werwulf's point. Here in Melbourne, I've found just the one outlet selling 1/144 trading minis, and then that comprises a mere total of a dozen CanDo items still "hidden" in their boxes. Nine of these are from the Bradley series. The price per item is more than Radsan, Ara5525 et al charge INCLUDING postage to Oz. So Werwulf, we Aussies are also looking for Asian "pen-pals"!!!

A couple of my colleagues Down Under have dealt with HLJ and been quite favourable in their comments. And the price HLJ is asking for a box of 10 "Early Jets" is pretty much F-Toys' recommended retail anyway.

Interesting. Mr Toys stock all the Cando stuff up here and are charging $5 each which is pretty cheap. I picked up a couple of the Pzkpf IV Kugelblitzes last week...very nice.

HLJ is good stuff, well, apart from their somewhat annoying way they handle pre-orders mixed with back-orders. I've been buying from them for a decade now and can't see myself stopping anytime soon.

dont talk to me about pre-orders and back orders....

Hannents have been driving me mad all year!