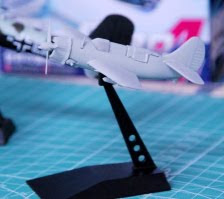 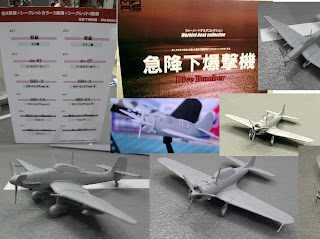 Dauntless looks nice!!
Helldiver a little ..but anything is much better than the old Arii kit..
Stuka..was not so necessary..we had Dragon(cando) and Eduard kits..but is a dive bomber...
The japanese...is Val? or Judy?
In my opinnion I could change the Stuka for a Barracuda...

The Helldiver looks terrible. Silly canopy and tail looks undersized. We need yet another Stuka like a hole in the head too. Give us a HS-123 if they feel they must include a German dive bomber.

I'll reserve judgement until I'm holding the models in my hands. Overall I am much happier with the quality of the offerings from Cafereo than those from F-Toys so I guess I'm a bit biased. Loved the Big Bird and the IF series even tho the KI-100 wing needed some "massage" for the proper look.

I'll also happily take the Stuka since I'd like to create a BoB diorama.

Here's to hoping that they might release later mark Spitties in the future! =-)

The Stuka is a D-Version, mainly used at the Eastern front

If it's a D-5 or nighter D-8 Stuka I'll take it. DML pretty much did everything else, but a Eastern R-2 model.

have you looked at

There "Airplane Kit" section has some great metal kits in 1/144.

Dont be put off by the terrible paint jobs!

yea, the paint jobs turned me off the CRs and Hs.

and I had a chance to snag 3 CR32s in a bundle for 20$ on Ebay this week...but past horrors in soft metal kept me away.

Shape with both CR32/42 is pretty decent. Can't comment on the Hs123 (but the Gladiator is bad). CR42 is easy to build too but still needs LOTS of filling and sanding, but my CR32 version was missing lots of details due to mould break down....maybe if you get one off a refreshed mould it'd be ok.

I agree; Gladiator fuselage profile doesn't look right. Both Italia biplanes are better, but wing struts are too big for 1/144; also, having to fix a METAL (=heavy) upper wing is a real pain in the *ss.