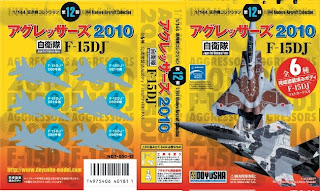 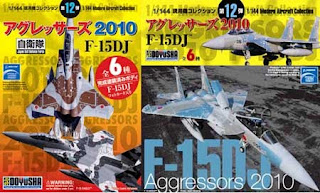 I hope they use a new mold. Their old F-15J's was really outdated.

...maybe they could borrow Takara's F-15 moulds from the two gimix series they released in 2009!?

I have always bought every 10-12
1:144 planes packs the japanese firms released for many years now,
as well as the many secrets and
specials. But now, this is the 2nd
pack -after the JASDF Phantoms- that I won't buy.
P.S. I already own 29 gashapon JASDF F 15, but that's enough !

It is a concern on many levels.

Are people in Japan only prepared to buy JASDF Aircraft, and are willing to buy endless versions of the same aircraft?

What is mabe worse, is it that they will no longer buy aircraft that are not JASDF?

Obviously , F-toys would indicate this is not true?

Is it just an interim business approach to get through hard times?

Will the market not end in a deadly spiral where only limited aircraft are produced in decreasing numbers too a shrinking market as i lack imagination and innovation?

The way they're going, these manufacturers will end up producing every aircraft currently serving in the JASDF. Is this the same thought process that Sweet has used in its effort to model every Zero ever built?

In line with BD99's comments, can any of our Japanese friends who visit this site tell us whether there really is a willingness for Japanese collectors to keep buying numerous versions of the same JASDF, IJN or IJA aircraft?