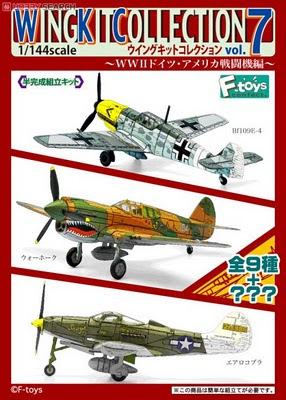 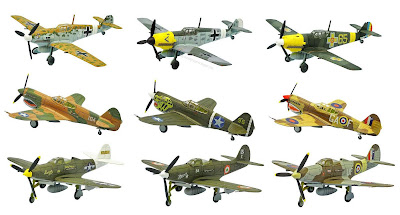 The series subtitles on various Japanese websites is confusing labeled as "WWII German and US Fighters" or "European Theatre" - although the line-up and marking don't quite tie-up.

The P-40E Flying Tigers will please many buyers as these guys have a legendary status in the flying world.

The P-39 should be a pleaser, as it has not really seen the light of day since the early days of that Revel kit! I think its a cool shape, and most of all that RAF cam scheme looks very nice indeed!

The bf-109s are for the most part 'ticks in boxes' there is a desert and an Early War/Battle of Britain Scheme, and a Romanian scheme - luckily the aircraft numbering does not clash with the forth coming Tomytec Gimix Bf-109 series numbering for Romanian aircraft in that series!

I would expect the usual Item and Series colour specials!

GOOD...Wing Kit Collection !!!
A boxset to buy!!
Filling the gaps in our collection.
For decal makers...Russian P-39 are essencial
P-40s...wow...many many versions..

Wow, and series 6 isn't even out yet! This is great! I'm particularly digging the P40E and the P39, the 109, not so much. Although they might be cheaper alternatives to the Tomytec re-release of the WOTL series.

I have to admit, I liked the Sky Captain movie and now I can finally build his plane with the P40E :-D.

P-40E at last! Lets hope Myk get behind this one with about 40 different P-40 and P-39 possibilities!

Looks to be a popular release. Very exciting indeed!

Bandai already did a P-40B, and a cracker it is too. We really needed the P-40E as it was arguably the most important version, as it bore the brunt of fighting in North Africa and the early Pacific war.

This set as well as the previous which hasn't even come yet is a very welcome sight. They could have done a complete set of the F4U-4, P-40, and P-39 by themselves! But yea I do wish somebody would come out with a long nose early version p-40b.

Zap, I knew about the Bandai P-40C, I could just never get my hands on one! The Revell P-40E has some serious fit issues, but it looks like a P-40E -- certainly more so than the Johnny Lightning offerings. And it's a short distance to modify them to early -K or even early short-fuselage -F versions.

1 P-40E markings are for the flying tigers after they were absorbed by the 14th AF;2 is for
P-40E in the Aleutian Islands. this plane was piloted by Jack Chennault the son of Claire Chennault;they were nicknamed the Aleutian Tigers; 3 is RAF 112 Squadron;the P-39Q 1 was piloted by Future MOH winner William Shomo who shot down 7 Japanese planes in one day flying a P-51; 2 belongs to the Italian airforce that fought with the allies after 1943; 3 is RAF 601 Squadron the only British Squadron to fly P-39
the 109 are marked for JG-27 and the third for Romania's 7th Fighter Group

I have done research on markings displayed Me-109 1 & 2 are from JG-27;#3 Is 7th Fighter Group Romanian Air Force;P-40 1 is The Flying Tigers after they were absorbed in to the 23rd Fighter Group, 14th AF;#2 Is an aircraft flown by Jack Chennault son of Claire Chennault. They were called the Aleutian Tigers and were stationed in Alaska;#3 is RAF 112 Squadron;P-39Q #1 Was piloted by William Shomo who went on to earn the Medal of Honor when he shot down seven aircraft in one day while flying a P-51;#2 is marked in Italian Co-beligerent Air Force which joined the Allies in 1943;#3 is marked in RAF 601 Squadron, the only British Squadron to fly the P-39

I have done some research on the markings. Me-109 A&B are for JG-27;C is 7th Fighter Group Romanian Air Force;P-40E is for the Flying Tigers after they were absorbed into the 23rd Fighter Group of the 14th Airforce;B is flown by Col. John "Jack" Chennault, son of Gen. Claire Chennault,he commanded the 11th Fighter Squadron in the Aleutian Islands the were nicknamed the Aleutian Tigers;C is RAF 112 Squadron;P-39Q A is an aircraft flown by future Medal of Honor Winner William Shomo;B is an aircraft flown by the Italian Co-Belligent Airforce which was formed in 1943 after Italy joined the allies;C is for RAF 601 Squadron which was the only RAF Squadron to operate P-39s

A Bandai C just sold on Fleabay this morning for $13. Also just remembered that Kami de Korokoro do a P-40B.