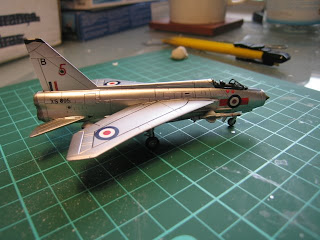 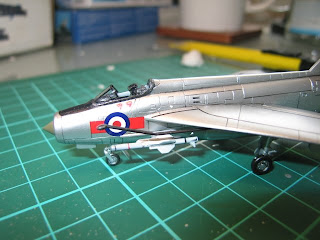 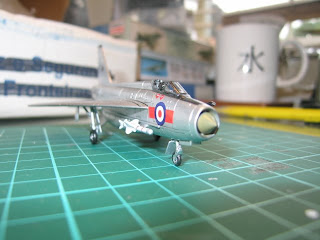 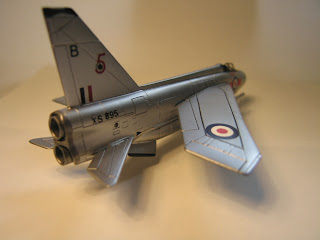 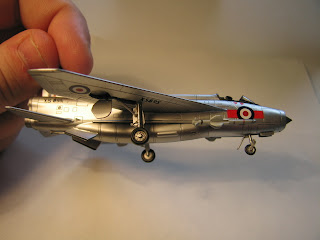 I wonder if that is the Matte Aluminium Bare-Metal foil RKM used?
If it is foil the way the panel lines are shown and even weathered is amazing.
well done.

I used Alclad ..paint and used Sakura ink pen..and removed the excess..this darken some areas near the panel lines.. I used in some areas a gunze metalizer(dark panel)..
BD...I did a new canopy.. and the antena under the radar cone broke? or you remove to avoid hurt the fingers?

i had not noticed that was missing, maybe it come off in transit?

yes..probably broked..and missed..was a needle..it´s only check in the old pics I sent ..well the neddle hurt fingers and is dangerous when a non modelist try catch the model...

That is one beautiful model of one seriously ugly plane!

i think the brute force and uglyness IS part of the beauty of this craft!

the raw power, for decades the only aircraft that could accelerate straight up in zero degree climb like rocket!
Hardly surprising when it really is two BUF engines with small wings AAM and a guy in a seat!

from the days when men were men and you could hit things with a hammer to get them working again!
;o)

I live a few miles from what used to be RAF Binbrook, one of the last operational Lightning stations. Long since closed of course but when I was (a lot) younger I used to go to their open days and the highlight was always the "Lightning goes ballistic" routine!

One year they had a special guest. One of the first UK show appearances of the F-15 Eagle. The Eagle put on a fine display of course. Then the PA announced the Lightning with a "..but can you do this" at which point a Lightning came straight at the crowd line down on the deck and at what seemed like the last second, pulled up, stood on its tail and bam! made like a Saturn V.

WHat decals did you use? I have the Revell kit but it only comes with Saudi decals (how silly)... i have mine half built because i would like to build an RAF version.

check the decals for sale on hannants site for hunter, hawk, tornado, raf etc. (or from your spares box?)

all you need really is period decals as long as the sizes are approximate you should be good to go, of course it depends on how Authentic you want to be?

I used the roundels from hunter decal... the red bar was from red solid decal sheet I cut and put he roundel over..the serial numbers was from Decadry applied over a clear decal film..
the only thing I have order to a friend who have a computer printer was the big 5 and oak leaf..
REvell released a kit with british version...was a camo green/gray and in tail have 2 black birds 11sq Brinbrok

Yeah, revell released 2 different version of the Lightning. One was the F.53 RSAF (Royal Saudi Air Force) and the other was the F.6 with British decals. Both could use better decal upgrades. I'm not building mine until I find a more appealing paint scheme, since the plane is rather "ugly" to put it bluntly.

Mike Grant released decals for 3 different schemes a while back, but he seems to have stopped releasing his decals in 1/144.

Frankly this is such an ugly plane that it would take a beauty from Nazca Decals to make it a worthwhile project. I might just lay down a colorful Frontier Airlines tail scheme on this. On second thought, probalby not!

Although, RKM has done and outstanding build here and motivated me to re-think the all aluminum scheme.