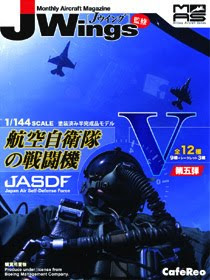 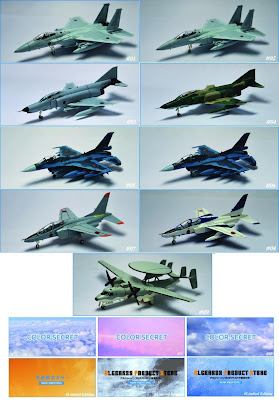 Algernon have officially confirmed the J-Wings Vol.5 Military Aircraft Series and it will be safe to say they will please :
a) Fans of the J-Wings and the JASDF
b) Insomniacs

Perhaps a little unfair, as the E-2C will interest a few people as this does look a nice looking aircraft that should appeal?

The items will be avialble in the colours announced today, and then it gets a little complex.

1)There will be some mystery colour options for the aircraft show, with the possibility of series special, or series special colour options.
2) There apears to be Three additional "Limited" editions, its not clear if we will see a repeat of the "Alpha" and "Bravo" style releases, or "CCW/CAG" style repaint mini series of 2009?

The RF-4 is long overdue and will be a welcome addition to the trading plane world. I will probably only get one (or two if they are really outstanding), Im pretty happy with my home made RF-4 conversion kit for Doyusha's F-4EJ.
John

Well with a excelent Revell kit of E-2C and a Heller kit..
I think it was waste of research,development ...maybe usefull to kits who don´t have modeling skills..
maybe a C-1 was more interessanting..

A C-1 (either the jet or the COD)would be very outstanding! You are quite correct about the Hawkeye though, revell's is forst class so we dont really need another one, nor another F-4EJ, F-15, F-2 or T-4. Something new would be nice a C-2 COD, an E-1 or S-2 Tracker or maybe even some USAF stuff like a B-66 or some Voodoos... .just a thought

I think that rkmasu was talking about the C-1 jet transport aircraft, John. There is a 1/300 scale collectors kit of the transport out there but nothing in 1/144th scale.

Yes,since is a JASDF box the transpot kawasaki C-1 was good but I don´t know if was possible put one in a trading toy box..
C-1 trader we can use the Miniwings kit and C-2 greyhound is possible with revell kit+ Ykraft conversion set.
But for not so experienced modelers with resin kits or trading toys collectors Cod C-1 and C-2 could be welcome and where is the Savage?
Soon they will fill all JASDF planes ...it´s time to find new series...past or old times..or euro/soviet planes...
I hope someone release the forgotten Su-24 Fencer,a new Viggen,a Super Etandart,a Harrier GR3 and Sea harrier(plz not the crown)..or past F3D skynight,FH3 Demon,T-2 Buckeye,T-38 Talon..

I knew which C-1 rkmasu was referring to. I would like one myself. We already have nice resin models of many of the 50's and 60's jets from Don's Custom models. these in my opinion are better models that the C-2 conversion you mentioned.
definitely an AJ Savage. A Fencer would be great, as would a good set of Flankers. Im still pining for a B/EB-66 and some nice Voodoos.
John

It's really time for either F-Toys or Algernon to devote some attention to a Soviet set. Virtually none of the major subject matter has been covered, other than the mediocre DML releases or the various resin kits. Mig 15 & Su 27 are the only good kits so far, much thanks to F-Toys!

It might be some time before we see anything though, since it's JASDF's 50th anniversary and we'll probably just get more T4, F15 and F4EJ's. Not that I'm complaining!

Add Mig 29 & Mig29UM to that set as well! That's one of my favorite jets and I totally forgot about it.