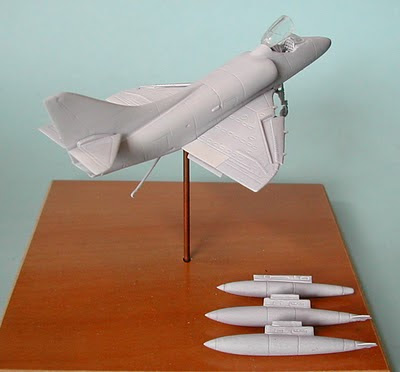 True to his word. Retro kit has shut up shop on the AFVs and has started working on long held ideas of producing kits and conversions for aircraft! Well, the future is looking good with this and the proposed items below..

I know this is one kit that will excite people waiting for the straight back version of the A4, and couldnt belive that Platz didnt follow through with this one!?

The kit comes with Starfighter-designed and manufactured decals for a VA-12 aircraft based on the USS Ranger.

On Hold:
The Rafale sets are currently on-hold waiting for the new Academy kit...

Starfighter Decals will be releasing some markings for slick-fuselaged A-4E/Fs, including Blue Angels..!

Agressors camo A-4(like the Two bobs top gun thinkertoys decal) and Blue Angels(the A-4 it was my favorite Blue Angels plane) should be nice!!