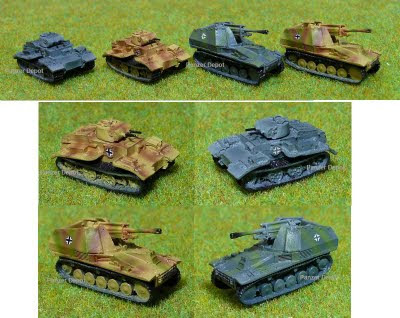 1/144 Pz.Kpfw I Ausf.F & Wespe - Panzer Depot
Panzer Depot has not one but two releases for you this week!

The unusual, but real Pz.Kpfw I Ausf.F variant, a surprisingly late development of the Panzer I concept, to provide fire support for infantry. Surprisingly, it did achieve operation status initially on the Eastern Front with the 1st Panzer Division, and latterly in the Balkans.

The Sd.Kfz 124 "Wespe" is more familier item, based upon the Pz.Kpfw II chassis that had become outmoded as a tank. The original chassis had the turrets removed and were modified to mount the 10.5 cm leFH 18