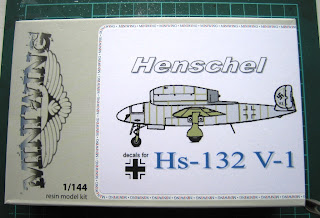 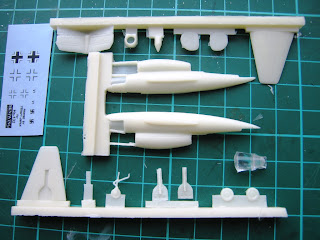 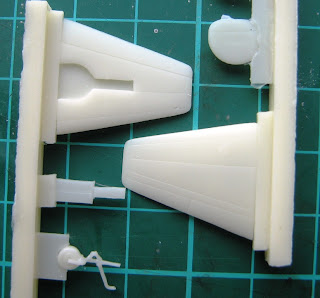 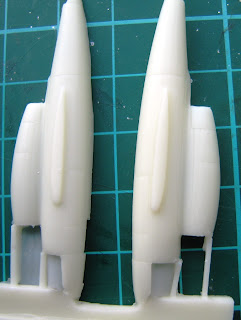 Its a fairly simple kits and should be a straightforward build. There are one or two fragile parts, but nothing a average resin modeller shouldn't be able to handle.

This kit actually has a solid resin canopy instead of a vac-form, but as the fuselage is hollow, you may wish to make your own and insert a prone position pilot! Decals for one scheme are also provided.

This kit has fine panel lines, and not many of them (so, if they don't show too well on the photos - its my fault not the kit). This is in part a reflection of the methods of construction used at this stage in the war on the various 'volks' projects. Also, everyone complains when there are 'canyons' running the length or a kit, so this should not disappoint!

This aircraft never flew, although the initial 3 prototypes where under construction when the war ended. It was intended more of a "dive bomber" against (originally to counter any seaborne invasion of Europe..., a bit late then?) and as the pilot was "prone" it aided taking high g-force loading, but made for poor visibility in key areas. it was envisioned to have a secondary role as an interceptor but not as core fighter.

Nice looking kit ...and plane.
I like it from a technical point of view (molding and casting as well as the design philosophy of the real thing).

However, The gates on some of the pieces where they attach to the pouring stubs look quite large (ie the wings). I have allready had one piece of fuselage broken in transit where it was attached by a large pouring stub on my Do-18.