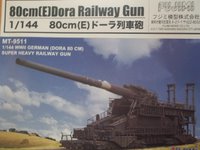 The mysterious 1/144 Dora has appeared on the FUJIMI site as a new item!!!
http://www.fujimimokei.com/newitem/index.html

maybe this will be the one that makes it into the HELLER box!?

there is a report (in Japanese) with pictures on el-bassers site (he has given persmiion for use of his dora photo) at the following location: http://geocities.yahoo.co.jp/gl/el_basser

it would appear with some care and thought it IS possible to get the dora to run on N-Gauge tracks!

I know which version I will be buying!!!

Well we need wait Wonder festival..next week... in Japan..and the box says..the release is in October... so we have time to save money..and think how to find and order this thing!!
But if this Dora is injected one..and made by Heller...I´m satisfied with detail level...

But the picture in Fujimi's site said the release date is February 10, not October. It should be available soon.

WTM is right....
it is on sale NOW in japan!
El-basser has already bought one and has a report (japanese) on his website!

I suggest a quick visit to the HLJ or Aoshima websites pronto!

Can't find it on either site. Any direct links?
btw, great site BD

sorry domichan, I assumed these sites would sell it... I have checked today and it isnt currently listed for sale on any of the usual sites :(

when I find one, I'll let EVERYONE know!!!

ps: thanks for the site, and remember to check the archives!