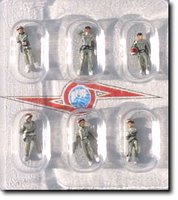 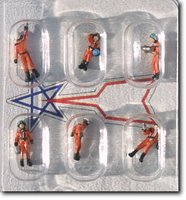 I picked these up last year, but the post yesterday regarding the "space workers" made think about some figures I bought last year!

Basically I bought them to uses as pilots or ground crew for aircraft - but I magaine they can be used by with GUNDAM?

The good news is that I can still find the Ultraman figures, the bas news is that Ultra Seven figures are in the house... in a box somewhere.....???

The bad news for you guys is that i think these are sold out !

Well there 1/144 kits of ultraman(that one with canards and a little fat) and ultraseven(that one who splits in 3 parts) planes....so these figures are usefull to colectors.. I just need find the pics of planes and send to you..

i have a coupl eof the ultraman vtol kit you talk about, I am not so bothered about the 3 part kit.

however send me the photo's I will publish them for the wider audience who may have an interest!