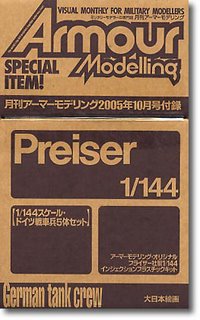 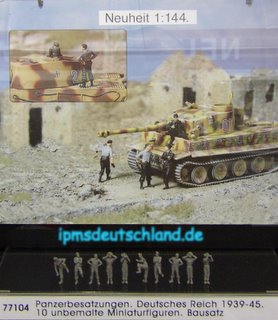 Well the talk on the 1/144 scene at the end of last year was what would 2006 bring!? and followng input from those "in the know" figures where the meant to be the big thing.

Not only from the usual specialist vendors, and guys like CGD getting in on the act with special editions. Trumpeteer had been spotted with some 1/144 figures at a show (i''ll ttry and find the photo),

we now have another big league player wading into the fray with Prieser releasing at least one set of figures to add to thier existing 1/144 range - its not clear if this is a one off set or a possible number of items in the range. (SEE ABOVE)

it is interesting to note that Prieser also did a special cover mounted release of a small set of Panzer Tank Crew last year in conjunction with the Japanese ARmour Modelling Magazine!
(SEE ABOVE)


(for those who don't know Prieser usually release figures amongst other items in the main Model Rail scales HO/OO, N & Z etc + the smaller ranges in the tradional modelling scales).

I picked up on this following Roberto's comments earlier (thanks!)
http://kits.kitreview.com/nurembergreleases2006mw_1.htm

lists a range of new kits in various scales coming out in 2006
(German Text)
http://www.ipmsdeutschland.de/Ausstellungen/Nuernberg2006/Nuernberg_2006.html

thanks .. well Preiser figures are top of art...I have the WW2 and modern pilots set... and are to very nice and delicate.. some have positionable arms and heads..
So Preiser wake up to 1/144 military... only drawback is very hard to find and high prices of each set...

Wow... It's too good to be true. Can't wait. I also have most of their 1/72 releases and their quality from the picture looks as good as usual. MUST BUY!

to "anon" preieser do some 1/144 akready, but mainly a WWII USAAF aircrew and a modern german aircrew and poss one otherset.

if you dont mind a bit of experimentation then their german rail staff and german fireman can exist in dirorama ok.

and to acknowledge WtmB, sdly yes they are exspensive... but you can always look out for offers!?

now what am I going to do with those preiser animals?

May be I should dump my panzer crews from CGD and pick up these Presier gems as they are in different levels. I do have some n scale figures from Preiser but I think they are 1/160.

this is the current range from preiser:

i still like the CGD crew albeit they can be expspensive to pick up.
I look forward to what CGD may do in the future, Rijk has been hinting at some new interesting ranges coming from them soon and over the year to come.

thinking about it the preiser prices are not too bad.

if your looking for a rane of WWII and modern pilots OZMODS do a nice range! maybe I will post some info! (but no pictures available)

Thanks for the link. Let me see if I can find in the US or Canada and place an order. I think they are useful also for my Gundam collection. :-Q..